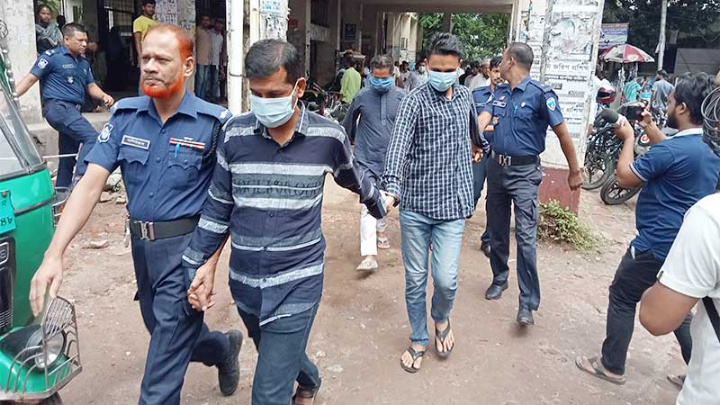 Seven suspended members of the Detective Branch (DB) of police have been jailed for seven years in a case filed over abducting and holding a businessman hostage for Tk 17 lakh ransom.

The court, at the same time, fined Tk 1 lakh to each of the convicts. In defaul, they will have to suffer one year in jail.

The judge started reading the verdict at 11am. Later at 12:20pm, he pronounced the judgment.

"Judge gave this verdict as the allegations were proved. They have been given five years jail terms under section 365 and seven 7 years under section 386. Both sentences are to be served concurrently. For this, the total sentence will be counted as seven years," said Advocate Mohammad Jahangir, the lawyer for the plaintiff in the case.

The state's public prosecutor Adv Faridul Islam said that on 24 October, 2017, people in plain clothes, introducing them as DB, picked up Teknaf-based businessman Abdul Ghafur in a microbus from Cox's Bazar.

They demanded Tk 1 crore in ransom to the victim's family by threatening to kill him in 'crossfire'. The family agreed to pay Tk 17 lakhs. Geting the money, Abdul Ghafoor was released at Shamlapur on the Cox's Bazar-Teknaf Marine Drive road the next morning.

Following the incident, Abdul Gafur's family members informed the Army security post of the area. Army personnel caught the microbus carrying the DB members at one of their check posts and recovered the money from their possessions.

At that time, DB SI Moniruzzaman ran away, but the remaining six people were arrested from the scene by army personnel. They were later suspended from the force.