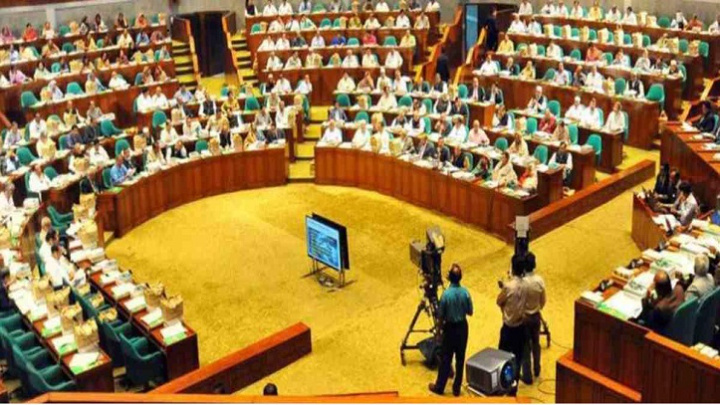 The ongoing parliament session is set to pass a law aiming to give legal cover to the chief election commissioners and other commissioners appointed through search committees in the past.

Once passed, the law will also provide a legal shield to all activities of those search committees.

Ahead of the general elections in 2014 and 2018, president picked CECs and other commissioners in 2012 and 2017 following recommendations by search committees.

The current Election Commission led by CEC KM Nurul Huda was formed on February 15, 2017. Its tenure expires on February 14.

Law Minister Anisul Huq yesterday said the president would appoint the upcoming CEC and other commissioners upon recommendation by a search committee to be constituted as per the proposed law.

"A bill on forming the Election Commission will be placed in parliament on Sunday. I hope it will be passed in the current Jatiya Sangsad session following all legal procedures, including scrutiny by the parliamentary standing committee concerned," he told

As his attention was drawn to the matter, election expert Badiul Alam Majumdar expressed his surprise.

He said the move was nothing but a government effort to "legalise all the misdeeds of the past Election Commissions".

"Once the new law is in place in this form, there will be a lack of transparency in appointments of CEC and other commissioners," said Majumdar, also Shujan secretary.

The draft law does not mention whether the names to be recommended by the search committee and the criteria of the selection would be made public.

Not disclosing the names might raise suspicion and questions in public mind over transparency in the appointments.

The draft proposed that the search committee will recommend 20 people, including five women, for the posts of the CEC and other commissioners. It also said the names of the candidates and information on their assets should be published in a circular with their consent.

The draft also suggested holding a public hearing on those selected for the appointments, Majumdar said, adding the clauses should be incorporated in the proposed law to be placed in parliament.

Mentioning article 48 of the constitution, he said, "As the president can't make any decision without consultation with the prime minister, it is obvious that the president will have to discuss with the head of the government before finalising the names of CEC and other commissioners."

"If this is the case, then question will arise," he also said.

"Going by the draft, there is no way to know if the president is giving appointments from the candidates pitched by the search committee."

The government move came nearly 50 years after the constitution prescribed enacting a specific law for forming the EC.

The move comes also at a time when almost all political parties, during the recent dialogue with President Abdul Hamid, demanded the JS frame a law in this regard.

Civil society members too demand enactment of a law for EC formation.

The ATM Shamsul Huda-led EC had prepared a draft law in 2011 and submitted it to the then Awami League-led government. But the law was never enacted.

The president initiated the dialogue with registered political parties seeking suggestions on forming an independent, neutral and credible EC on December 20.

A total 25 political parties participated in the talks, which ended on Monday with participation of the ruling AL. Seven political parties, including the BNP, however, refrained from taking part in it, saying a credible election is not possible under the current government.

WHAT THE DRAFT SAYS

According to the proposed law, a six-member search committee, to be headed by a judge of the Supreme Court's Appellate Division, will recommend names to the president for appointing the CEC and other commissioners.

The judge will be nominated by the chief justice.

The five other members will include a High Court judge, to be nominated by the CJ, the comptroller and auditor general, the chairman of Bangladesh Public Service Commission and two distinguished citizens nominated by the president.

The search committee will make the recommendations in 10 working days following its formation, reads the draft law.

The president will then make the appointments upon the recommendations. Search committee will also be formed under the law in future.

According to the proposed law, the search committee cannot recommend anyone for the post of CEC who has been convicted and sentenced to at least two years' imprisonment for committing any criminal offence or moral turpitude or has been convicted under the International Crimes (Tribunal) Act, 1973 or holds any profitable posts of the republic.

The cabinet division will provide secretarial assistance to the search committee, according to the proposed bill.

The search committee will determine the agenda of its meeting whose quorum will be fulfilled in the presence of at least three members and the committee will take decision on votes.

If the number of votes is equal in any case, the presiding member of the search committee can cast a second vote to reach a result.

According to section 4 of the proposed law, the search committee will perform its responsibilities with transparency and neutrality.

The search committee will recommend the names to the president for the appointments of CEC and other commissioners considering their qualifications, disqualifications, experiences, and honesty.

It can hunt for qualified persons and at the same time can ask names from the political parties and professional organisations.

The committee can propose two names to the president for the post of CEC. It can also recommend two persons against each of the commissioner's post.

Badiul Alam Majumdar said it was totally unbelievable that the draft law is being passed to give legitimacy to the ECs formed through search committees.

"Since Bangladesh is a democratic country, everyone has to be accountable for their actions. This draft law will hamper accountability," he said.

Majumdar accused the previous Election Commission of destroying the country's election system and depriving people of exercising their voting rights. He also raised questions against the incumbent EC.

"A total 42 distinguished citizens have urged the president to constitute the Supreme Judicial Council SJC to investigate the allegations of financial irregularities, corruption and gross election-related misconduct against the present Election Commission. But once the draft law is passed, none can raise any question against it," he said.
The Daily star