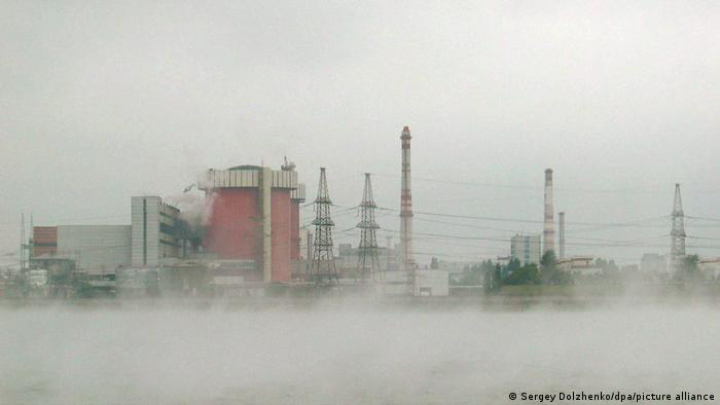 A blast took place 300 meters (1,000 feet) away from the reactors just after midnight, Energoatom said.

The company posted photos of a impact crater on social media, including one in which a man stood inside the crater to give a sense of its size.

"Currently, all three power units of the PNPP (Pivdennoukrainsk Nuclear Power Plant) are operating normally," Energoatom said. "Fortunately, there were no casualties among the station staff."

However, the attack did damage power buildings at the power plant complex as well as transmission lines for a nearby hydroelectric plant.

"The invaders wanted to shoot again, but they forgot what a nuclear power plant is," Zelenskyy said in a post on social media. "Russia endangers the whole world. We have to stop it before it's too late."

Russian authorities have not yet responded to the accusations.

The blast near the Pivdennoukrainsk Nuclear Power Plant comes after the Zaporizhzhia Nuclear Power Plant further east was shut down earlier this month due to Russian shelling, prompting concerns about a possible nuclear disaster. That facility is now under Russian military control.

Ukrainian President Volodymyr Zelenskyy on Monday accused Moscow of engaging in "nuclear terrorism" after Russian troops attacked a second nuclear power plant in the country, this one in the south.

The Zaporizhzhia Nuclear Power Plant, not only Ukraine's but Europe's biggest, has been under Russian control for weeks and has been a constant source of concern for the wider world with authorities, such as the International Atomic Energy Agency (IAEA), warning of the potential for nuclear catastrophe.

In neighboring Poland, government authorities began distributing iodine pills to firefighters nationwide. Poland's Interior Ministry said pills would be made available to all citizens in the event of a catastrophe. "This is a standard procedure provided by law, which is applied in the event of a possible (nuclear) radiation emergency," read a ministry statement.

The Kremlin on Monday has denied allegations that Russian troops had committed war crimes near Izium — the Ukrainian town where authorities found more than 400 bodies at a mass burial site.

Over the weekend, Ukrainian investigators who are exhuming bodies from the shallow graves said they found evidence of torture and execution, including bodies with their hands tied. They accused Russian troops of committing war crimes.

"It's the same scenario as in Bucha," Kremlin spokesperson Dmitry Peskov said on Monday, referring to the actions of Russian troops in Bucha in April. "It's a lie, and of course we will defend the truth in this story."

From Monday, the Baltic countries of Estonia, Latvia and Lithuania, as well as Poland, will enforce a temporary joint ban on Russian citizens who want to cross the border in to the EU.

The four countries no longer permit Russian citizens with a Schengen visas to enter their territory for tourism, business, sport or cultural purposes.

However, exceptions will apply for Russians who are already permanent residents in any of the four countries, as well as for political dissidents and humanitarian cases.

"We should use all the tools in the toolbox to make Russia stop this war," Estonian Prime Minister Kaja Kallas said on Saturday.

The ministry said it was sending four more armored Panzerhaubitzer 2000's (literally "tank howitzer 2000") as well as a collection of ammunition.

"With that, the number of the systems delivered in collaboration with the Netherlands rises to 22, of which 14 are from Germany," the ministry said on Twitter.

Dutch Prime Minister Mark Rutte also mentioned this collaboration on Monday, noting after a call with his German counterpart Olaf Scholz that recent Ukrainian successes showed "that international military support works" and saying that his government and Germany would work on further joint initiatives.

Defense Minister Christine Lambrecht was quoted as saying that the systems "have more than proved themselves in battle" and that Ukraine was "full of praise for the system and has voiced the wish for more howitzers."

"They are coming directly from factory overhaul, which it was possible to accelerate considerably in collaboration with the industry," Lambrecht said.

Especially early in the conflict, Germany's reticence to deliver offensive weaponry, and then its sluggishness in arranging exports once it had changed its mind, had come in for criticism from Kyiv.

The defense ministry also said in an earlier post that it "is delivering" two more MARS II multiple rocket launcher systems and 50 more armored military personnel carriers known as Dingos. The wording of the announcement made it difficult to ascertain whether this constituted an additional pledge or an additional delivery, and whether it meant they had already been dispatched or their future delivery had now been arranged.

Russia has likely lost at least four combat jets in Ukraine over the past 10 days, the United Kingdom's defense ministry said in an intelligence update on Monday.

That would bring Russia's total hull losses to 55 since the invasion of Ukraine started in late February. British intelligence says Russia's lack of air superiority has been a key weakness in its invasion strategy to date.

"There is a realistic possibility that this uptick in losses is partially a result of the Russian Air Force accepting greater risk as it attempts to provide close air support to Russian ground forces under pressure from Ukrainian advances," the UK defense ministry said.

"Russian pilots' situational awareness is often poor; there is a realistic possibility that some aircraft have strayed over enemy territory and into denser air defense zones as the front lines have moved rapidly," it added.