But still, these girls face the 'otherness' and often has to fight the racism of many sorts. It is interesting how they transform into the 'heroes' even to staunch 'Bangalees' when they bring glory to nation while left to abuse when defeated 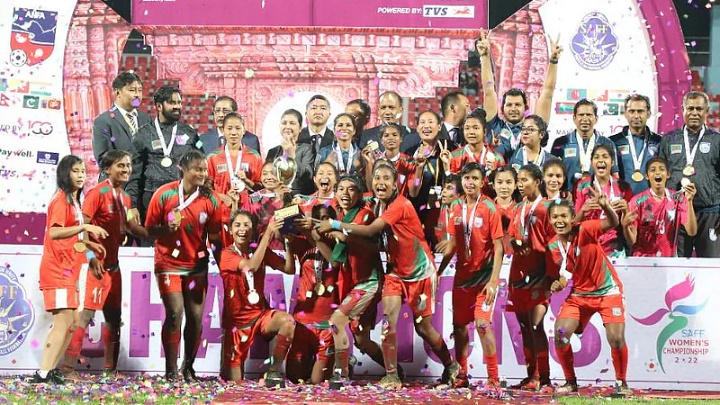 Gusztav Sebes, the legendary football coach, an avowed Marxist, who transformed the football to the modernity by inventing 4-4-2, lamented after Hungary's defeat at the World Cup final “ Had we won the match, the socialism would not be crumbled in the country.”

The defeat of the Hungary team, known as magical Magyars, the erstwhile best side of the world to West Germany was a huge shock in the footballing world but like Sebes many thought it has even greater consequences shaping up the politics and mass psychology.

The socialist government of Hungary was toppled down within a few years as many believed the defeat played a big part of diminishing the morale of the nations and many of its East European neighbours followed the suit soon.

One may disagree with the former Hungarian sports minister and it is only open to speculation the extent a sporting glory may stretch to set up the consequences of human history but even the most sports loathing mind would agree football played an important part shaping the world history during the last century.

The game has amazing capacity not only to bind people with its mesmerising magic but also breaks many stereotypes and metamorphises societies at large.

And in that sense, the amazing win, with the fear of being cliché- the fairy tale one- of Bangladeshi girls at the lap of Himalayas on Monday ought to become another glorious milestone in the annals of the history.

SAFF Championship, the supreme accolade of the most densely populated yet the hinterland of global football may not shine as the most glorious silverware but the win of Sabina, Maria, Krishna, Rupna cannot be undermined.

“Women Football” is a different category while mentioning 'Football' is enough when men are playing. Even at the turn of the century, football was mostly regarded as a 'masculine' thing.  Women, even in the Western World, were not supposed to play football. In 2000 the women football actually became centre of discussion when Matildas, the players of Australian national women team posed naked for a calendar. Even Sepp Blatter, former FIFA president said in 2004, the women football can only bloom if the size of their skirt is reduced.

One may imagine, if that is the point of view of the so called modern societies, how difficult it was for the girls in the country like Bangladesh playing football. Like their garment working compatriots they faced myriads of harassment, bullying and innumerable resistance.

However, as countless stories of Latin American footballing stars revealed that they found salvage in the game, saving them from poverty, malnourished and other malice, the indomitable girls, found the same avenue.

Sabina Khatun, Rupna Chakma, Maria Manda, Akhi Khatun and others kept on fighting against all the odds and they hardly got much applaud or support initially. Not only the social resistance, in cases it was found that a national level footballer died of fever without getting any treatment, girls faced bullying while returning home through a local bus as Football Federation failed to accommodate a dedicated vehicle for them among other unwanted incidents.

Even so, their determination, albeit being the chief reason was not enough for the ultimate success. The bunch of girls were lucky to get some patronization and support. BFF started to camp with the age level girls' teams and handed over the responsibility to coach Golam Rabbani Choton. 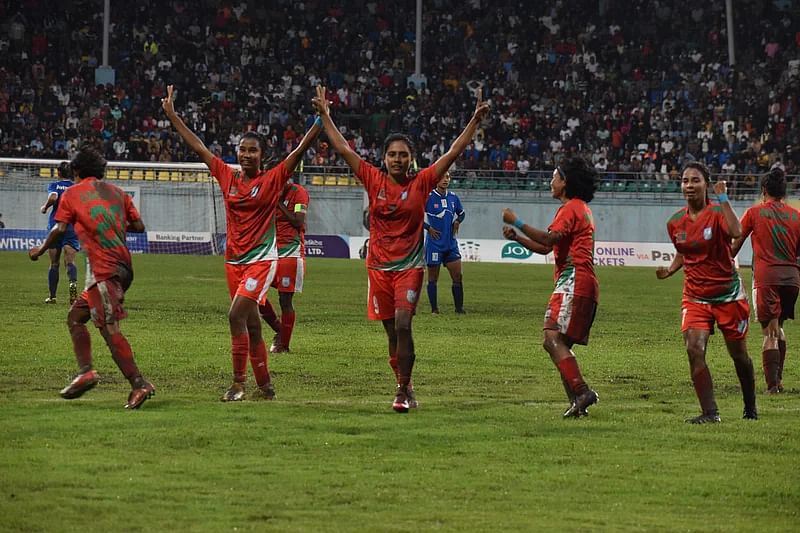 Almost everyone now knows the struggle and rise of the Kalasindur Girls. The girls from a remote, border area formed the core of Bangladesh women teams in age levels and started gleaning some international success.

However, I would like to mention the story of Akhi Khatun, a little girl hailed from Sirajganj. About four years ago, when I was discussing with Paul Thomas Smalley, the technical director of BFF, at the BFF house, he showed how their training regime is helping the girls.

Akhi, according to him was only 4 feet 1 inch when she started training at the age of 10 in 2013 but within a couple of years she shot up to a well-built 5 feet 6 inch girl (now 5 feet 8 inch according to Wikipedia). As a matter of fact, earlier this year, one of the Maldives striker while facing Akhi said, she is physically and technically so intimidating that any player fears to face her.

Akhi's story is a great example of how the proper nurturing transforms a feeble, malnourished child into a robust, confident human being. It shows the importance of providing proper support to create human resource and also emphasis that every person has the potential to thrive. Akhi and her teammates shatter the taboo of weak, backward stereotype of the so called third world women and shows how they may become champions.

The stories of Rupna Chakma, the best goalkeeper of the tournament, who made an incredible goal-line save to keep her side's dominance during a crucial phase of the game, and Maria Manda is rather different. 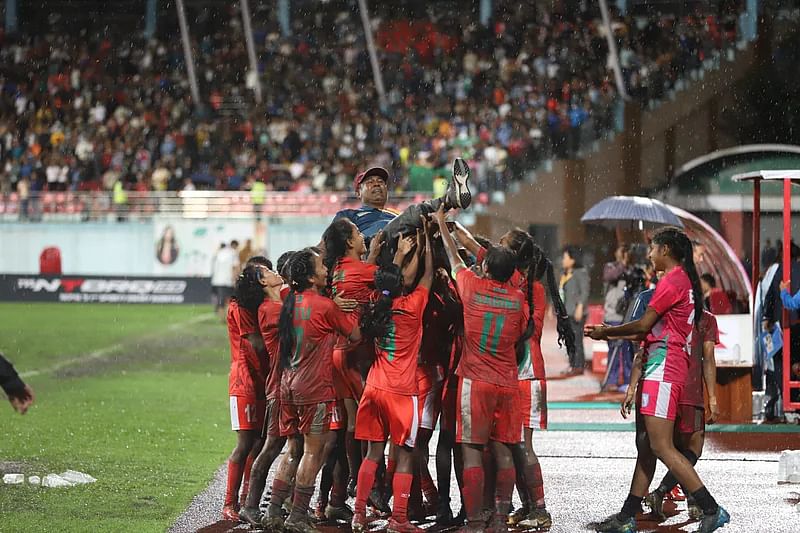 Although ethnic minority people constitute just 2% of the total population, they were the backbone of the initial football sides and still dominates in large numbers. The lack of patriarchal dominance and habit of hardworking living in the harshest of conditions helped them become well-equipped to play the physical game.

But still, these girls face the 'otherness' and often has to fight the racism of many sorts. It is interesting how they transform into the 'heroes' even to staunch 'Bangalees' when they bring glory to nation while left to abuse when defeated.

The discussion is large and academic but in a nutshell it can be said the 'fighting against all the odds' unite these girls from different backgrounds. That binds them strong as the football team becomes an ideal melting pot to juxtapose all of them and teach them to live with harmony by maintaining the difference rather than imposing the hegemony.

And despite all the glittering success, one must not forget another common thing is the economic class of these girls. They belong to the poorest portion of the society and just like the previously mentioned,  Latin American footballers only option for them is to conquer the world with the ball.

That is perhaps the most important take from the fantastic win. This is the win for those who wants to fight against all the odds, who bet their life for success and who knows without achieving that they have no other option.

And with a bit of support, with discipline anything can be achieved. Had Sebes be still alive, he would say, these girls are revolutionaries. These girls invigorate the most hapless, the have-nots to dream.

They are the symbol of Bangladesh that was dreamt when the nation got its independence with a glorious people's revolution known as liberation war.

They are our champions. They are Bangladesh.