Road Safety World Series 2022: The Aussies required 21 off the last six deliveries but it was Brad Haddin's immaculate game sense and striking capability that helped his team sneak out of a tricky situation. Australia Legends won this game by 3 wickets. 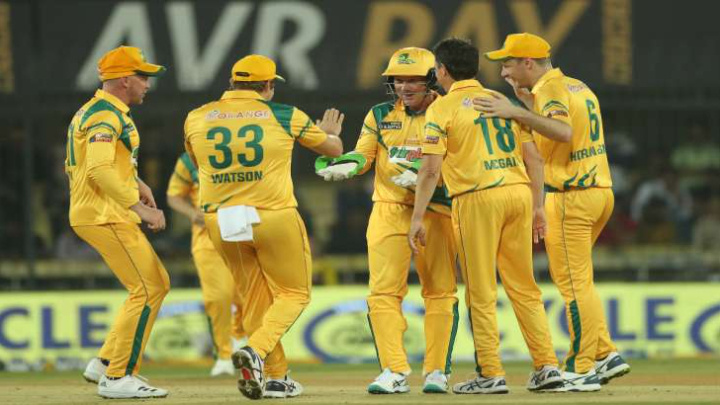 Australian wicketkeeper-batsman Brad Haddin turned back the clock as he pulled off one miraculous heist against Bangladesh Legends leaving them stunned. The Road Safety World series which began on September 10, 2022, has brought in all the greats of the game under one roof. The ongoing tournament is a visual treat for cricket fans who can enjoy their favorites have a go at each other once again on the cricket field.

Australia Legends skipper Shane Watson won the toss and opted to bowl first, a trend that has gained a lot of popularity in the international arena too. Mehrab Hossain and Nazimuddin opened the proceedings for Bangladesh and they wanted to get off to a good start against the mighty Aussies. Dirk Nannes shortened Hossain's stay as he dismissed him in the very first over of the innings. On the other Brett Lee who was steaming in left Nazimuddin clueless and sent him packing for a golden duck. Bangladesh Legends were left reeling on 8/2, but matters got even worse. Aftab Ahmed, Alok Kapali, and Nazmus Sadat were dismissed in quick succession and they had almost no impact on the game. It was Elias Sunny's innings of 32 from 29 deliveries that provided some respite to Bangladesh. Shane Watson-led Australia Legends were quite poor with the bowl as they ended up conceding 39 extras. Bangladesh Legends set a target of 158 for the Aussies to chase.

Australia certainly knew that they had to bat decently to get to this total. Just like in the old days, skipper Shane Watson blasted off. He scored a quickfire 35 off 21 deliveries before he was dismissed by Elias Sunny. His counterpart Cameron White was dismissed by Abdur Razzak while he was batting on 1 off 3 deliveries. Australia's number 3 Callum Ferguson scored a watchful 24 off 23 deliveries but was later picked up by Elias Sunny. The Bangladesh Legends team had Australia in all sorts of trouble as they had reduced Shane Watson's side to 109/6 by 15.4 overs. Australia batted quite decently, but it was the conceded extras in the first innings that started to haunt them. The Aussies required 21 off the last six deliveries but it was Brad Haddin's immaculate game sense and striking capability that helped his team sneak out of a tricky situation. Australia Legends won this game by 3 wickets.