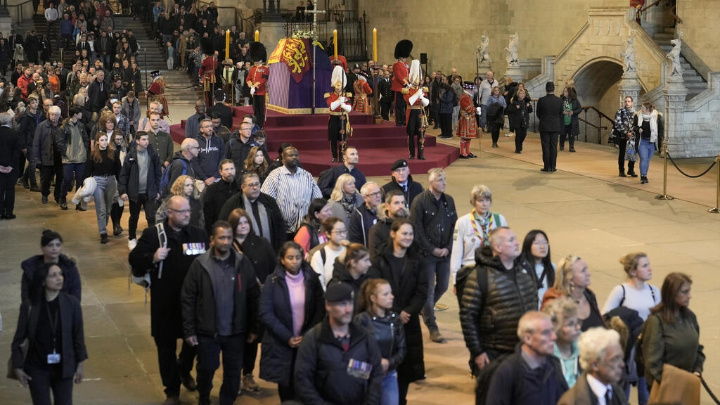 Members of the public file past the coffin of Queen Elizabeth II, lying in state on the catafalque in Westminster Hall on 18 September 2022 in London. AP - Markus Schreiber

Some 2,000 guests, including world leaders such as US President Joe Biden, French president Emmanuel Macron to Japan's Emperor Naruhito will attend Queen Elizabeth II’s funeral at Westminster Abbey in London on Monday.

US President Joe Biden was Sunday to pay his last respects in London to Queen Elizabeth II, as ordinary mourners waiting in marathon lines were warned that time was running out to view her coffin lying in state.

After witnessing the sombre scene in parliament's Westminster Hall, Biden, Japan's Emperor Naruhito and other world leaders were due to attend a reception with the late queen's successor, King Charles III.

Biden, who flew in late Saturday, has said that Elizabeth "defined an era" after she reigned for a record-breaking 70 years leading up to her death on 8 September, aged 96.

There was also a private audience at Buckingham Palace for Prime Minister Jacinda Ardern of New Zealand, which like Australia and 12 other Commonwealth realms now counts Charles as its sovereign.

"You could see that it meant a huge amount (to Charles) to have seen the sheer scale and outpouring of people's love and affection for her late Majesty," she told BBC television Sunday.

Commonwealth leaders were among dozens of heads of state and government in attendance, as Britain stages its biggest-ever policing operation.

'Do not set off to join the queue'

The first members of the public were already camping out in advance to catch a glimpse of Monday's grand farewell at Westminster Abbey, which is expected to bring London to a standstill and be watched by billions of viewers worldwide.

As the queue continued to snake for kilometres along the River Thames Sunday morning, the waiting time stood at more than 13 hours, and the line is likely to be closed by the evening.

"To avoid disappointment please do not set off to join the queue," the government said.

As mourners slowly filed by on Saturday evening, Prince William and his estranged younger brother Prince Harry led the queen's eight grandchildren in a 12-minute vigil around the coffin.

The Queen’s grandchildren hold a Vigil beside Her Majesty’s coffin at Westminster Hall. pic.twitter.com/lChZW6OdIP

Britain will hold a minute's silence at 8.00 pm (1900 GMT) on Sunday to reflect on the "life and legacy" of the queen ahead of her funeral.

Eurostar said it would observe the moment on its cross-Channel trains.

Queen Elizabeth's state funeral, the first in Britain since the death of her first prime minister Winston Churchill in 1965, will take place Monday at Westminster Abbey in London at 11.00 am (1000 GMT).

Reflecting on the queen's wishes for the hour-long ceremony, the former archbishop of York, John Sentamu, said she "did not want what you call long, boring services".

"The hearts and people's cockles will be warmed and at the same time, there will be a moment of saying this is a funeral service that is glorious in its setting," he told BBC television.

Leaders from Russia, Afghanistan, Myanmar, Syria and North Korea were not invited to join the 2,000 guests.

Moscow's foreign ministry last week called the decision "deeply immoral", and "blasphemous" to the queen's memory. China will attend at the abbey, but was barred by parliamentary leaders from the lying-in-state.

After the funeral, the queen's coffin will be driven to Windsor Castle, west of London, for a private burial when she will be laid to rest alongside her late husband Prince Philip, her parents and her sister.

"It must have been so difficult for her being a solitary woman" in a world dominated by men, Charles's wife said in televised comments.

"There weren't women prime ministers or presidents. She was the only one so I think she carved her own role."