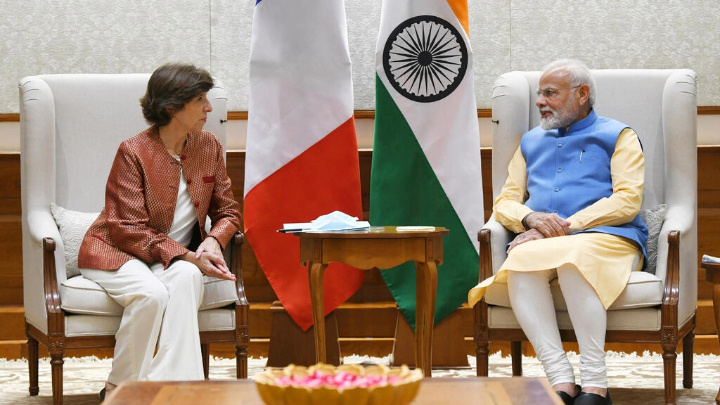 During an official visit to New Delhi this week, French Foreign Minister Catherine Colonna said she "understands and respects" the history of Indo-Russian relations, underlining the role India could play in opening talks between Moscow and Kyiv.

While seeking to pressure on Moscow to open a “sincere and honest dialogue” with Kyiv, Colonna said she respected India’s ties with Russia.

“We know the history ... We know of India's past and present relations with Russia” Colonna said during her two-day trip, where she met with Prime Minister Narendra Modi.

“We know the differences in our relations vis-à-vis Russia ... We do respect your country’s decision to keep going with some relations,” she told India Today TV, as New Delhi has faced criticism for not condemning Russia's invasion of Ukraine.

The remarks came a day before Prime Minister Modi flew to Uzbekistan, where he met with Russian President Vladimir Putin during a summit of the Shanghai Cooperation Organisation on Friday.

Modi and Putin have reportedly discussed ways to further widen ties during their meeting on the side-lines of the summit.

The price India is paying wherever military disengagement with China has taken place is loss of access to areas it had traditionally patrolled. This will be the case in Gogra-Hot Springs too, with India's Patrolling Point 15 in a new buffer. Status quo ante doesn't look feasible.

Colonna’s visit also came as India and China withdrew troops from a disputed area in the Himalayas, where a recent skirmish in 2020 sparked a military flare-up between the two neighbours who fought a border war over the territory 60 years ago.

On what was her first trip to Asia as foreign minister, Colonna also underscored that France and India had shared concerns over Beijing's political machinations.

Referring to her meeting with Indian Foreign Minister Subrahmanyam Jaishankar in New Delhi, Colonna said: "We spoke a lot about the general situation in the Indo-Pacific and the many challenges that have emerged because of China.

“We also share the same concerns because we know the role the Chinese are playing and we want to make sure that there is no imbalance in the Indo-Pacific," she added.

India's foreign office said her discussion with the country's top diplomat also focused on an array of issues including bi-lateral trade, which hit €9.8 billion in the first quarter of 2022.

For France's @navalgroup, reeling from Australia’s cancellation of a $90 billion order for 12 conventional subs, India offers an irresistable strat opportunity.

With India needing both nuclear and conventional subs, Naval Group can offer a package deal.https://t.co/j5CXqF0zh3

In May this year, Prime Minister Modi made an official visit to the French capital – but it was his 2015 trip to Paris that grabbed the headlines, with the signing of a Franco-Indian contract for the purchase of 36 French-built Rafale jets worth €8.7billion.

At the time, Indian opposition politicians cried foul that kickbacks had sealed the deal, arguing that Indonesia "only" paid €8.1 billion for 42 Rafales earlier this year.