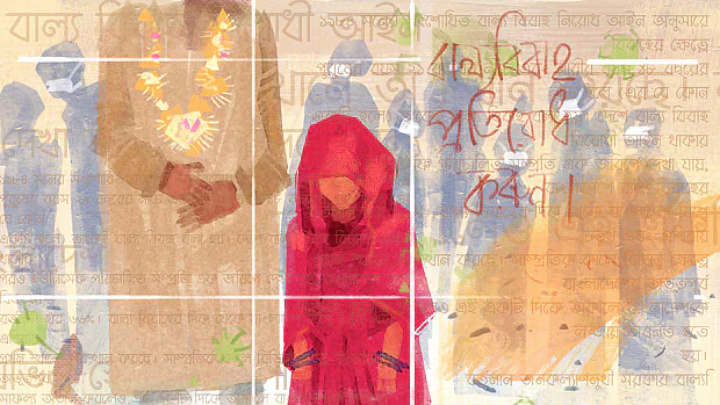 Marriage of girls between 15 to 19 years of age has increased by 10 per cent in 2021 compared to the previous year. Covid fallout led to the marriage of 27 per cent of girls of this age group in two years.

This was revealed in a survey conducted by United Nations Population Fund (UNFPA) on Sunday.

Two survey reports on child marriage during Covid-19 and menstrual health management in urban slum areas were published at an event in Hotel InterContinental in Dhaka.

The marriage of girls below 18 years is considered as child marriage in Bangladesh.

Explaining the reason behind considering 19 years as girls a child, the organisation said many of the respondents who were 19 years old during the survey were below 18 years at the beginning of 2020 and 2021.

A report by the Bangladesh Bureau of Statistics (BBS) and Multiple Indicator Cluster Servey-2019 (MICS) of UNICEF revealed that 33 per cent of girls in the 15-19 year age group were married off while the percentage was 51 for girls below 18 years.

The respondents say the girls felt more at risk of getting married off during covid due to an increase in violence against women and bullying.

Non-government organisation Manusher Jonno Foundation (MJF) conducted the survey in association with UNFPA. A total of 2,820 girls from 20 districts participated in the survey.

Only 24 of the victim of child marriage could return to school while 15 per cent of the married girls were pregnant during the survey.

A separate survey on menstrual health was conducted on one thousand girls and women in Dhaka city.

The survey finds that 42 per cent of women still use unhygienic cloth during their menstrual cycle and there are many superstitions that prevail among them on the matter.

Of the respondents who use sanitary napkins, 68 per cent said they do not feel comfortable buying the napkin themselves.

The report recommended separate toilets for women and awareness building on menstrual hygiene.

Speaking as a chief guest, the women and children affairs ministry’s secretary Md Hasanuzzaman said the superstitions about menstruation should end.