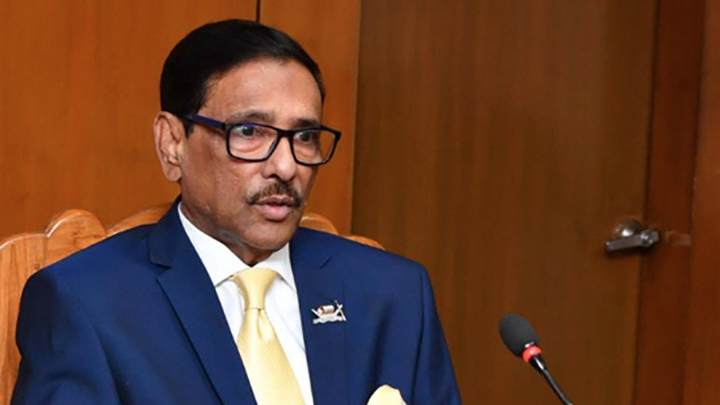 “Complaining to foreigners and seeking help from various embassies openly is a clear manifestation of the BNP’s spineless politics,” he told a press briefing at his secretariat office here.

Quader, also the road transport and bridges minister, said the AL has no instance of bowing down in running the state but the BNP has it.

He said as the BNP is a fragile and dependent political party, it complains to foreigners against the country and requests the foreigners to interfere in the Bangladesh’s internal affairs.

The BNP wants to see the country as a dependent one and submissive to others, he said, adding: “On the other hand, the AL wants to elevate the country to a prestigious and prosperous position”.

About the Myanmar’s mortar shell firing inside the Bangladesh territory, the AL general secretary said Bangladesh summoned the Myanmar envoy in Dhaka and protested the incidents.

“At that time, Myanmar said the mortar shells accidentally landed on the Bangladesh’s border. They told Bangladesh that they will be careful in the future,” he said.

Quader said as the same incident happened again, the Ministry of Foreign Affairs is looking into the matter as per the international laws and protocols.

He said the incidents are being examined to know whether it happened as a result of clashes between Myanmar’s security forces and various groups, or a provocation.

The road transport minister said Bangladesh is an independent and sovereign state, while every inch of its soil is like the own existence to Prime Minister Sheikh Hasina’s government.

Mentioning that Bangladesh wants a peaceful solution to any problem, he said Prime Minister Sheikh Hasina spoke about this in London yesterday (Saturday) and the Ministry of Foreign Affairs is working on the matter too.

Quader said the country’s people are still aggrieved with the BNP for its various misdeeds but the party is again walking on the path of terrorism and provoking the AL men and police.

He said the BNP leaders are blaming that they are not given change to hold programmes but when they are holding programmes, they are choosing the path of terrorism and targeting police for attacks.

The AL general secretary urged the BNP not to create anarchy in the name of movement.

During the meeting, the envoy expressed Russian interest in Bangladesh’s road development.

The global situation and issued related to mutual interest were also discussed during the meeting.