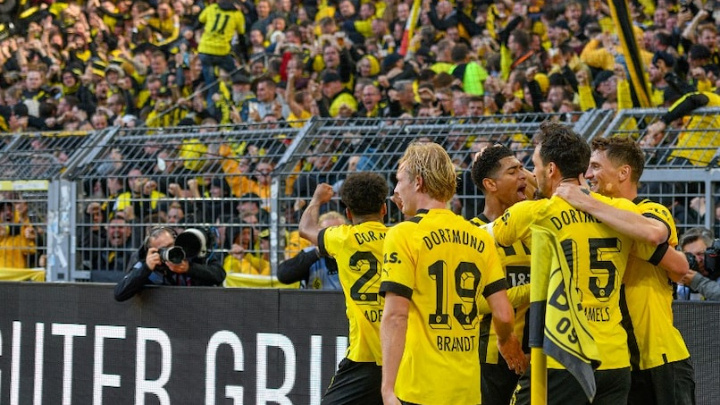 Teenage substitute Youssoufa Moukoko fired Borussia Dortmund top of the Bundesliga on Saturday with a 1-0 derby win over Schalke, as Bayern Munich suffered their first defeat of the season at Augsburg. Bayern's 1-0 loss was the fourth time in a row they have dropped points in the league, after three successive draws. In Dortmund, the home side looked set to lose another chance to capitalise on Bayern's slip-up, before a late goal from 17-year-old striker Moukoko saw them claim all three points.

In Augsburg, the home side roared out of the blocks, clearly motivated for a big showing against their Bavarian neighbours.

Augsburg's Florian Niederlechner had a golden opportunity to open the scoring after 11 minutes, but a crucial intervention from Bayern defender Dayot Upamecano saw his shot scuffed into the hands of Manuel Neuer.

As the half continued, Bayern began to find their rhythm, with Sadio Mane looking certain to score after 32 minutes before being denied by a last-ditch lunge from Augsburg's Max Bauer.

Augsburg, who beat Bayern 2-1 in the corresponding fixture last year, were not content to play for a draw and continually opened Bayern up on the counter.

The deadlock was eventually broken from an Augsburg free-kick, with a miscue from Brazilian defender Iago landing perfectly for Mergim Berisha, who tapped the ball home.

The visitors continued to press for an equaliser as the match went on, but Augsburg held on for a deserved victory.

Dortmund's victory over their bitter derby rivals was tempered by a potentially serious ankle injury to captain Marco Reus.

Reus, who missed Germany's 2014 World Cup triumph due to an ankle injury, was stretchered off in tears in the 30th minute after a clash with Schalke defender Florian Flick.

Jude Bellingham went close to the opener after play resumed, but his glancing header was kept out by a fingertip save from visiting keeper Alexander Schwolow.

Dortmund striker Anthony Modeste nearly scored with a header of his own in first-half injury time, but his attempt at a first home goal for Dortmund bounced just wide.

Modeste was subbed out in the 64th minute for Moukoko, who immediately added speed and directness up front.

Dortmund's continued pressure on the Schalke goal finally paid off in the 79th minute, when Moukoko headed in a superb cross from Marius Wolf.

American forward Gio Reyna - brought on for Reus in the 30th minute - almost added a second when his gliding effort hit the post two minutes later.

The victory was Dortmund's fourth 1-0 win in seven games this season.

Elsewhere, Eintracht Frankfurt made it three wins in their last four games with a comfortable 3-1 victory at Stuttgart.

In Leverkusen, a 57th-minute goal from Kerem Demirbay looked set to have secured the home side just their second win of the season, but Milos Veljkovic salvaged a 1-1 draw for Werder Bremen.