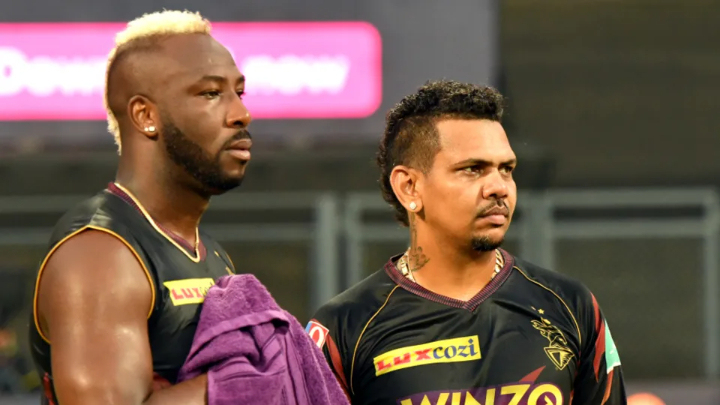 The West Indies selection panel has "decided to move on" as far as Andre Russell's inclusion in the T20 World Cup squad is concerned, chief selector Desmond Haynes has said. Russell and Sunil Narine, currently playing for Trinbago Knight Riders in the CPL, were both left out of the 15-member squad that saw the return of Evin Lewis.

Haynes said they decided to pick someone "in form" instead of Russell, who last played a T20I in the T20 World Cup last year.

"We had a meeting with Andre Russell earlier in the year," Haynes told Ian Bishop in an interview on the sidelines of Wednesday's CPL game between Jamaica Tallawahs and St Kitts & Nevis Patriots. "We're still not convinced yet, he's not performing as well as we would like to see him in the competition. I think in the situation with Andre Russell, we've just decided to move on, and look for someone who's in form, and doing well in the T20 format."

In a press conference later, Haynes said he wasn't sure if Narine, who hasn't featured in a T20I for West Indies in over three years, wanted to play after the conversations captain Nicholas Pooran was having with him.

"I did not get any notice from Narine regarding his availability to play. There were conversations that the captain was having with Narine, and from all reports, it seemed that he was not interested.

"Yes, again, the captain told me he's reached out to Narine, but I'm not too sure he wants to play."

Narine has been a consistent performer in the CPL and won the Player-of-the-Match award on Wednesday night, hours after the squad was announced, for his all-round performance of 26 off 20 and 2 for 9 from two overs against Guyana Amazon Warriors. He has been batting in the Knight Riders middle order this CPL and has picked six wickets in 20 overs so far at a frugal economy rate of 4.25. Last season, he picked up 12 wickets at a staggering economy rate of 4.37.

In the same game on Wednesday, Russell picked 3 for 16 and bowled eight dots in his 17 balls. He hasn't been among the runs this season, but he had scored much better in the inaugural 6ixty which preceded the ongoing CPL. Russell was the second-highest run-scorer in the 6ixty with 137 runs from five innings, striking at 192.95 with 15 sixes.

Russell and Narine have been playing in T20 leagues around the world for many years and were signed by Abu Dhabi Knight Riders for UAE's ILT20 which will be played early next year. Before the CPL, they played the Hundred in England. While Narine was the top wicket-taker for Oval Invincibles with 11 wickets from six games, Russell scored 148 runs for runners-up Manchester Originals, striking at 168.18 with 12 sixes. He also picked four wickets but leaked at 10.64 runs an over.

Even though Russell was among the platinum picks for the BBL overseas draft, he went unpicked eventually possibly because of availability issues as the BBL will clash with the ILT20 and SA20 in South Africa.