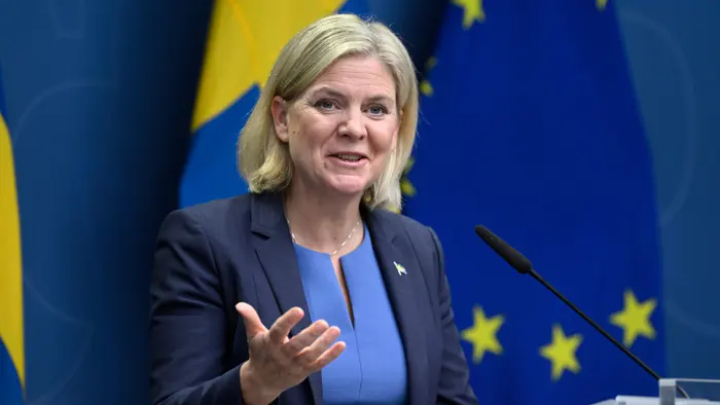 Sweden's right-wing opposition appears to have won in a razor-thin electoral race. The big winner of the elections are the far-right Sweden Democrats, who could become part of government for the first time.

Sweden's right-wing opposition appears to have won a thin majority in the country's parliament with nearly all votes counted.

Swedish Prime Minister Magdalena Andersson said that she would resign and that preliminary results were clear enough to draw conclusions. She said that it was important that Sweden gets a new government as soon as possible.

Leader of the nationalist Sweden Democrats, Jimmie Akesson, declared victory for the four-party bloc and pledged to "put Sweden first."

Ulf Kristersson of the conservative Moderates, who is the most likely candidate for the post of Prime Minister, said that the new government will "get Sweden in order."

"I will now start the work of forming a new government that can get things done, a government for all of Sweden and all citizens," Kristersson said.

The result is yet to be officially confirmed.

Results too close to call for days

The results were too close to call before postal and overseas votes had been included into the count. So far, the Moderates, Sweden Democrats, Christian Democrats and Liberals hold a two-seat lead over the governing Social Democrats.

99.9% of votes from all 6,578 voting districts had been counted by late on Wednesday. If results were confirmed, the right-wing opposition would win 176 seats in the 349-seat parliament.

The governing Social Democrats and its coalition would win 173 seats in this instance, the tallies showed.

Far-right to be part of governing coalition

Never before have the Sweden Democrats, a party who relies on anti-immigration and nationalist rhetoric, been part of a government.

The party has so far won more than 20 percent of ballots, becoming the second-biggest party behind outgoing Prime Minister Magdalena Andersson's Social Democrats, which have dominated Swedish politics since the 1930s.

The Sweden Democrats are set to overtake the Moderates, having gained 20.6% of the vote compared to the coalition 19.1%.

The Sweden Democrats had initially been shunned by all major parties when they first entered parliament in 2010 due to the party's neo-Nazi roots. In late 2019, the Moderates said they were ready to cooperate with the far-right party, which has expelled more radical members in an attempt to move toward the political mainstream.

Andersson said she understood that many Swedes were worried about a party with white supremacist roots becoming the country's second-largest party and a likely part of the new ruling coalition.

"I see you concern and I share it", she said.

During the election campaign, Kristersson of the Moderates vowed to crack down on crime and "straighten out" Sweden. He has also called for a stricter immigration policy, earning criticism that he was moving his platform toward that of the Sweden Democrats.

"A Sweden that doesn't work has become the new normal," Kristersson argued during the campaign.

Sweden's Dagens Nyheter newspaper said that the Moderates' leader could "go down in history as the far-right's locksmith," opening the door for the Sweden Democrats to participate in a right-wing coalition government.

The Moderates, and the opposition Christian Democrats and Liberals, seem to have lost seats, with the Sweden Democrats now positioning themselves as the dominant force on the right.