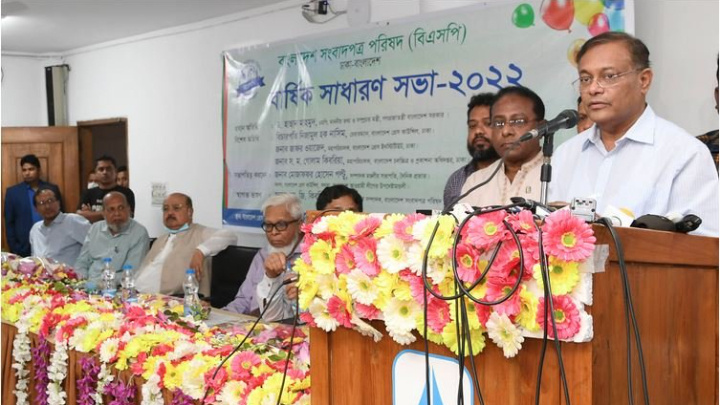 Information and Broadcasting Minister Hasan Mahmud on Tuesday said BNP’s politics of saying ‘no’ to everything needs to end.

The minister said these while addressing the annual general meeting of Bangladesh Sangbadpothro Parishad (BSP) at an auditorium of Press Institute Bangladesh (PIB) in the capital.

Hasan said BNP secretary general Mirza Fakhrul Islam Alamgir has said that they would carry out movement along with like-minded parties, but previously he claimed that they are in movement. It is really difficult to understand which is right, he added.

He said the countrymen have been hearing for the last thirteen and a half years that BNP would launch movement. And their movement means hurling patrol bombs and conducting arson attacks on innocent people and attacking the police.

He said the people would resist them if they (BNP) want to carry out such violence again and the Awami League will be beside the countrymen.

About the mass media, the minister said there are about 1250 newspapers in the country. And it has been possible as Prime Minister Sheikh Hasina is media-friendly, said Hasan, also Awami League (AL) joint general secretary.

He said, it is regrettably true that many newspapers are not published regularly. But its owners publish their newspapers whenever they get ads, he added.

Even, he said, the editor himself is the reporter of many newspapers. As per a demand of journalists and publishers, the government has already identified about 400 irregular newspapers while the concerned authority has been asked to take actions against 200 newspapers, he added.

About the bills for government supplements in national days, Hasan said, “You all know about the world situation. You also know about the limitation of allocation of the finance ministry. The outstanding bills of some newspapers is about Taka 10 to 12 crore. They would get the dues today or tomorrow. But there is no scope of giving supplements like before.”

The minister urged the journalists to present the development and progress news on their respective mass media.