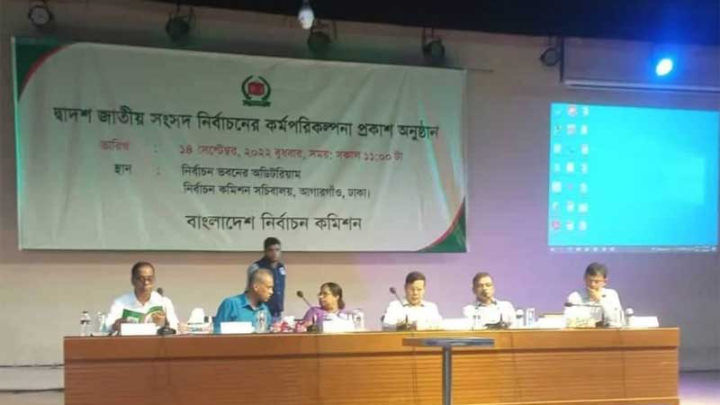 The Election Commission (EC) has announced that the 12th parliamentary polls will be held in the last week of December 2023 or in the first week of January 2024.

The schedule for the polls to 300 constituencies will be announced after November 2023.

Election Commissioner Mohammad Alamgir made the disclosure while unveiling the roadmap for the next parliamentary polls at a program at Nirbachan Bhaban auditorium on Wednesday.

Other election commissioners and officials of the commission were present at the program.

Mohammad Alamgir said that the general election will be fair and impartial if the election commission’s plans are implemented.

The elections policy will be unveiled in January and the boundaries of the constituencies will be re-fixed in June next year, as said by the election commissioner. The EC also plans to hold a dialogue with electoral stakeholders in October this year, said Mohammad Alamgir.

1. Building confidence in the government and Election Commission of the political parties participating in the elections;

3. Building the confidence of political parties in the used EVM;

4. Control of money and muscle power;

5. Maintaining law and order during elections;

7. Not facing any kind of obstruction from the opposition/contesting candidate/supporter/police/administration in orderly campaigning;

10. Creating opportunities for voters to vote for candidates of their choice;

11. Providing training to a large number of election officials;