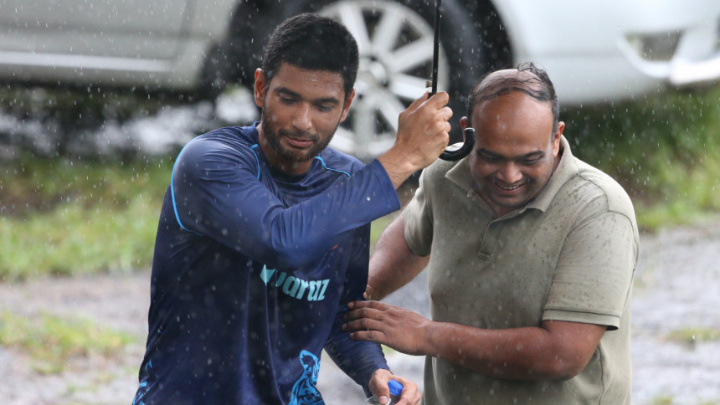 The second day of the match-scenario three-day training camp for the ICC T20 World Cup next month and the preceding tri-nation series in New Zealand under the supervision of new technical consultant Sridharan Sriram at the Sher-e-Bangla National Stadium in Mirpur was marred by rain on Tuesday (13-09-2022). Here are some moments of the day in pictures. Photo: Firoz Ahmed/ BCB

The Bangladesh Cricket Board (BCB) on Wednesday left out former T20I skipper Mahmudullah Riyad as it announced a 15-member squad, to be led by premier all-rounder Shakib Al Hasan, for the upcoming T20 World Cup in Australia next month.

Mahmudullah, who led the Tigers in the previous edition of the T20 World Cup last year in the UAE, has come under scrutiny for his lean patch in the shortest format of the game lately, especially due to his low strike rate.

It was also learned that the cricketer had fallen out of the team management and selectors' favour since a dismal showing in the Asia Cup, in which Bangladesh exited from the group stage without registering a single win earlier this month.

However, star opener Liton Das, wicketkeeper-batter Nurul Hasan Sohan, and pacer Hasan Mahmud -- all of whom were left out of the Asia Cup due to injuries -- have been recalled into the side for the World Cup.

A hamstring injury saw Liton miss the final two ODIs against Zimbabwe in August and the entirety of the Asia Cup while Sohan could not travel to the UAE for the continental championship due to a finger injury, picked up during the Zimbabwe tour. Hasan Mahmud, who had returned to the national side in the last Zimbabwe tour after over 16 months, was unfortunate to injure his right ankle during a practice session ahead of the Asia Cup.

Soumya Sarkar, who was dropped from the squad following his poor performances in the last edition of the T20 World Cup, has been kept as one of the four stand-by players in the squad.

Whispers of Soumya's inclusion to the side were rife in the past few days with the opening position still the major area of concern for the Bangladesh team management ahead of the marquee T20 event.

Yasir Ali, who has had injury concerns lately, also returns to the squad.

This will also be Bangladesh's first T20 World Cup without the experienced campaigner Mushfiqur Rahim, who retired from the format just a few days after the Asia Cup. In fact, skipper Shakib is the only one who remains from among the big four of Bangladesh with Tamim Iqbal retiring from the format in July this year and Mahmudullah unpicked.