Ananya Panday has shared selfies with Ranbir Kapoor on her Instagram handle. She called him her new best friend. See here 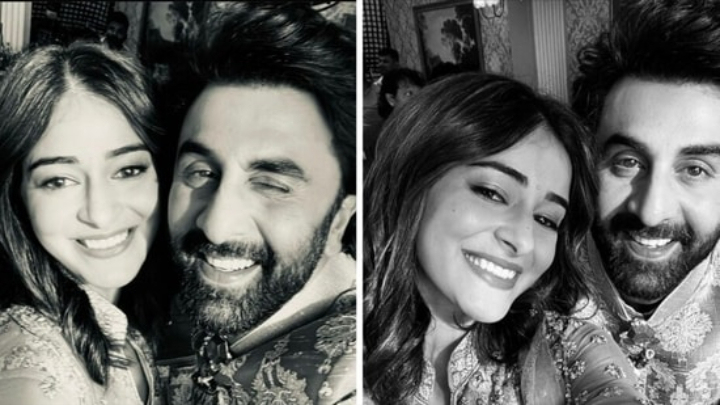 Actor Ananya Panday shared selfies with Ranbir Kapoor on her Instagram handle. In the pictures, Ranbir and Ananya are smiling while taking selfies amid their new shoot. She wore an ethnic suit while he wore a sherwani in the black and white pictures. She labelled Ranbir as ‘DostAstra.’ (Also read: Ananya Panday shares a glimpse of sunset in Italy, leaves bestie Suhana Khan impressed)

She captioned the pictures, “new day, new shoot, new best friend.” She used the hashtag #dostastra on the post. One of her fans commented, “Wow you have already moved on to new movie shooting", with reference to her caption. Another fan wrote, ”Love you Ananya." Other fan wrote, “This picture made my day.” Many of her fans dropped heart emojis for her bond with Ranbir on the pictures.

Ananya was last seen in Liger, alongside Vijay Deverakonda. She has also been in news regarding her private life. In the latest episode of Koffee With Karan 7, filmmaker and host Karan Johan confirmed that Ananya and Ishaan Khatter have indeed broken up. She was recently holidaying in Italy and updates her fans through pictures and videos on Instagram. She will be next seen in Kho Gaye Hum Kahan alongside Siddhant Chaturvedi and Adarsh Gourav.

Ranbir Kapoor was recently seen in Brahmastra, alongside Alia Bhatt. Produced by Star Studios and Dharma Productions, Brahmastra follows Shiva (Ranbir), a man with special powers who ventures on a journey with Isha (Alia Bhatt) to stop evil forces from destroying the world. It released on September 9 this year.

The movie was also released in other languages apart from Hindi- Telugu, Tamil, Malayalam and Kannada. The film also has cameos by Shah Rukh Khan and Deepika Padukone. It marks the first collaboration between Ranbir and his wife Alia. The two began dating after working on the film.