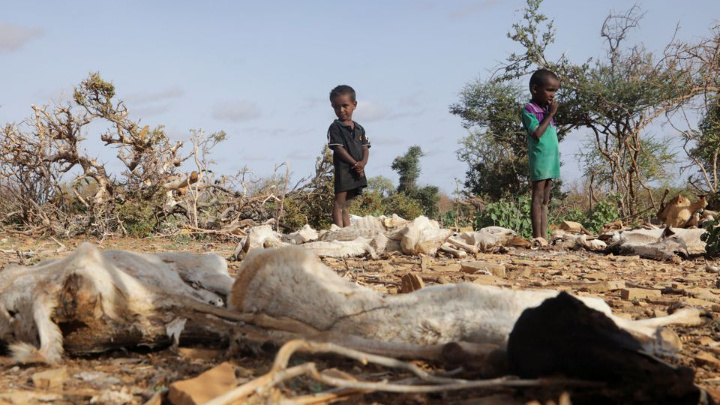 More than 500,000 Somali children under five are expected to suffer severe acute malnutrition and risk death from famine this year, a number unseen in any country this century, the U.N. children's agency said on Tuesday.

"We've got more than half a million children facing preventable death. It's a pending nightmare," James Elder, spokesperson for the U.N. children's agency UNICEF said at a Geneva news briefing.

The United Nations has warned that parts of Somalia will be hit by famine in coming months as the Horn of Africa region faces a fifth consecutive failed rainy season. The projection is more severe than in 2011, when famine killed more than a quarter of a million Somalis, around half of whom were children.

Civilians gather outside their makeshift shelters at the Kaxareey camp for the internally displaced people in Dollow, Gedo region of Somalia May 24, 2022. REUTERS/Feisal Omar/File Photo

The prediction of 513,000 children likely to suffer from severe malnutrition was an increase of 30 percent from an estimate in June.

Elder said nutrition centres across Somalia were already at maximum capacity and infants were receiving treatment on the floor.

"You've got critically ill children who, without treatment, may die in a matter of hours," he said.

UNICEF said last week that over 700 children had died in nutrition centres across the country.

The president of the International Committee of the Red Cross (ICRC) said that too many people will have already died in Somalia by the time a hunger emergency is declared.

"The alarm bells are ringing loudly," Peter Maurer said at a separate briefing, calling for faster action by the international community.