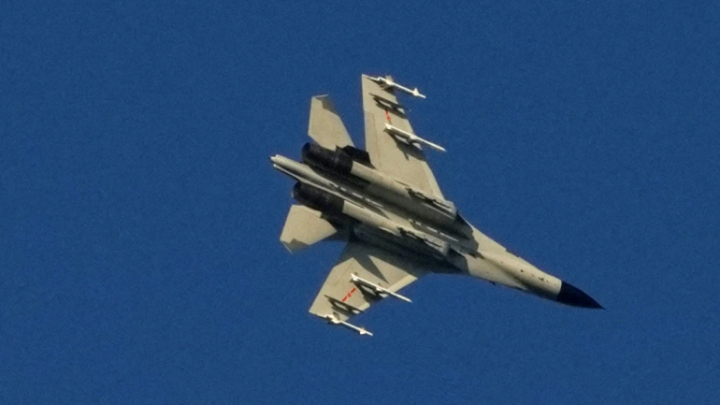 Plan is to go beyond existing measures and target sensitive technologies like computer chips and telecoms equipment.

The United States is considering options for a sanctions package against China to deter it from invading Taiwan, with the European Union coming under diplomatic pressure from Taipei to do the same, according to sources familiar with the discussions.

The sources said the deliberations in Washington and Taipei’s separate lobbying of EU envoys were both at an early stage — a response to fears of a Chinese invasion which have grown as military tensions escalate in the Taiwan Strait.

In both cases, the idea is to adopt sanctions beyond measures already taken in the West to restrict some trade and investment with China in sensitive technologies like computer chips and telecoms equipment.

The sources did not provide details of what is being considered, but the notion of sanctions on the world’s second-largest economy and one of the global supply chain’s biggest links raises questions of feasibility.

“The potential imposition of sanctions on China is a far more complex exercise than sanctions on Russia, given US and allies’ extensive entanglement with the Chinese economy,” said Nazak Nikakhtar, a former senior US Commerce Department official.

China claims Taiwan as its own territory and last month fired missiles over the island and sailed warships across their unofficial sea frontier after US House of Representatives Speaker Nancy Pelosi visited Taipei in what Beijing saw as a provocation.

Chinese President Xi Jinping has promised to bring democratically-governed Taiwan under Beijing’s control and has not ruled out the use of force. He is set to secure a third, five-year leadership term at a Communist Party congress next month. Taiwan’s government strongly rejects China’s sovereignty claims. 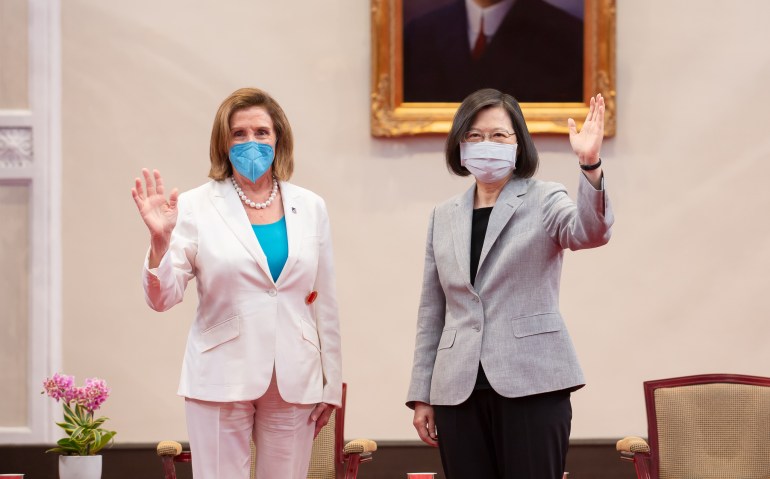 China held its largest ever military drills around Taiwan after the visit of House Speaker Nancy Pelosi as tensions over the self-governed island soared [File: Taiwan Presidential Palace via EPA]

In Washington, officials are considering options for a possible package of sanctions against China to deter Xi from attempting to invade Taiwan, said a US official and an official from a country in close coordination with Washington.

US talks over sanctions began after Russia invaded Ukraine in February but took on new urgency after the Chinese reaction to Pelosi’s visit, the two sources said.

The US, backed by NATO allies, took a similar approach to Russia in January with a threat of unspecified sanctions but this failed to dissuade Russian President Vladimir Putin from launching his invasion of Ukraine.

The White House is focused on getting countries on the same page, including coordinating between Europe and Asia, and avoiding provoking Beijing, the non-US official said.

Reuters was unable to learn details on what specific sanctions were under consideration, but some analysts suggested China’s military could be the focus.

“Big picture, initial sanctions conversations will likely revolve around curtailing China’s access to certain technologies required to sustain a military operation against Taiwan,” said Craig Singleton at the Foundation for Defense of Democracies.

Taiwan’s Foreign Ministry said it had discussed China’s recent war games and the “great challenges” China poses to Taiwan and the region with the US, Europe and other like-minded partners, but could not disclose details.

China’s Foreign Ministry and the Chinese Embassy in Washington did not immediately respond to requests for comment.

Top Taiwanese officials’ calls for sanctions preparations have intensified in recent weeks. A recent Chinese white paper, which withdrew a promise not to send troops or administrators to Taiwan if Beijing takes control of the island, has prompted a redoubling of their efforts with Europe.

Taiwan has not asked for anything specific, only for Europe to plan what actions it may take if China attacked, one source briefed on discussions said, and has asked Europe to warn China privately that it would face consequences.

EU officials have so far shied away from imposing tough sanctions on China over human rights issues, as the country plays a far bigger role for the bloc’s economy than Russia, said another person familiar with the matter.

EU sanctions would require all 27 member countries to agree, which is often elusive; consensus was tough even in isolating Russia after its invasion of Ukraine, in part because its gas was critical for Germany.

All of Europe, excluding the Vatican, has formal diplomatic relations with Beijing but not Taipei, though Taiwanese and European officials have had extensive, private contacts since China’s military exercises began, the sources say.

Germany, the bloc’s economic engine, is “wary,” according to another official familiar with the discussion. “I don’t think the Russia-Ukraine [war] has fundamentally changed the way they view their relationship with China.”

But there is growing concern in the German government over its economic dependence on China, with the economy minister pledging a new trade policy and “no more naivety” on Tuesday.

A spokesperson for German Chancellor Olaf Scholz declined to comment.