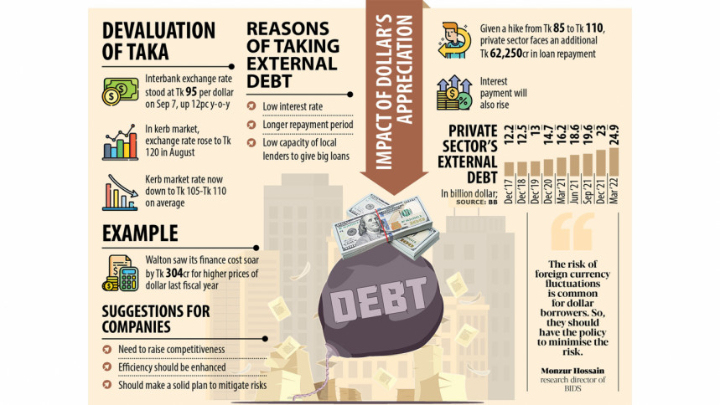 The finance costs have at least doubled for the firms that have taken on dollar-denominated loans from external sources owing to the depreciation of the Bangladeshi taka against the American greenback.

Borrowers have been hit by the local currency's at least 25 per cent slide in two ways: the payments on both interest and principal have gone up.

It came after the dollar rose as high as Tk 110 amid a dearth of American greenback caused by higher import bills.

This means if a company had borrowed $100, it received Tk 8,500 before the exchange rate of the local currency shot up.

In March, the external debt of the private sector rose 53 per cent to $24.9 billion. It was $16.2 billion in the same month a year earlier, Bangladesh Bank data showed.

At the current dollar rate, the private sector will have to pay an additional Tk 62,250 crore while servicing loans. However, since borrowers enjoy a grace period and longer payback tenures, the amount might vary.

The cost of funds for Walton Hi-Tech Industries PLC almost quadrupled to Tk 473 crore in the recently ended financial year of 2021-22, from Tk 124 crore a year ago.

The company's loss stemming from the currency depreciation was more than Tk 304 crore in the financial year.

The main factor behind the increase in net finance costs was the significant depreciation of the taka against foreign currencies, especially US dollars and euros, Walton said in its financial reports.

Although it has surged to Tk 95 in the banking channel, the dollar actually costs Tk 95 to Tk 98 currently, according to Muhammed Omar Faruk Ripon, chief financial officer of Walton.

"If there had been no currency depreciation, Walton's profit would have risen by at least Tk 304 crore," he said, warning that the problem is going to be acute in the coming months since the local currency has depreciated sharply since June.

Consequently, the local electronic giant's profit took a hit as it did not opt to increase the prices of products and pass on the burden to consumers despite the rise in the costs of raw materials and operations.

"We have foreign loans and we have to pay interest for them. But the interest costs have risen due to the depreciation of the local currency," Ripon said.

Walton is not the lone company bearing the brunt of the currency depreciation. It is hitting every firm that has borrowed from external sources or imported raw materials.

As the world's most important currency, the dollar often rises in times of turmoil, in part because investors consider it to be relatively safe and stable, according to a New York Times article.

Runaway inflation, hike in interest rates and global uncertainty for the Russia-Ukraine war have sent the American greenback to a significantly higher level against almost all currencies.

In Bangladesh, the exchange rate of the dollar in the interbank foreign exchange platform, where banks buy and sell among each other, stood at Tk 96 yesterday, up more than 12 per cent year-on-year.

But for importers, it has cost about Tk 105 in recent months amid the dollar shortage.

Business people have alleged that they sold US dollars at Tk 93 to Tk 95 to banks, whereas they have had to buy them at Tk 110 while settling letters of credit.

Raw material prices have increased due to the depreciation of the local currency, prompting firms to raise the prices of finished goods to absorb the higher production cost.

However, Ripon says, the prices can't be hiked abruptly since such an adjustment would erode the purchasing capacity of consumers.

"So, we have tried to increase the efficiency to tackle the situation."

A top official of a steel maker, which has a large volume of foreign loans, says his company has counted extra finance costs due to the currency depreciation.

"As the taka was artificially overvalued in the previous years, we kept a provision to tackle the currency fluctuation. Still, the provision is not enough to tackle such a steep spike in finance costs."

Kamruzzaman Kamal, director for marketing at Pran-RFL Group, which has borrowed from international sources, said: "It is obvious that we have to pay more to repay foreign loans owing to the currency depreciation. Still, foreign loans are more lucrative compared to local loans."

There is only one way to avert the profit erosion which is passing the burden on to consumers by increasing the prices of products.

"But doing so is not possible all the time considering its impacts on customers," he said, adding that Pran is cutting costs, eliminating waste, and raising efficiency and productivity to tackle the situation.

Ahmed Shaheen, additional managing director of Eastern Bank Ltd, says a negative impact of the taka's decline on the dollar borrowers was expected.

"However, most of the loans of the borrowers in Bangladesh are not dollar-denominated. This has helped them avoid incurring a huge loss."

The companies that sell their products in the local market have been impacted the most compared to exporters, he said.

Monzur Hossain, research director of the Bangladesh Institute of Development Studies, says the risk of foreign currency fluctuations is common for dollar borrowers.

"So, they should have the policy to minimise the risk."

One of the strategies for the private sector can be raising efficiency so that they don't lose competitiveness after increasing the prices of goods, the economist said.