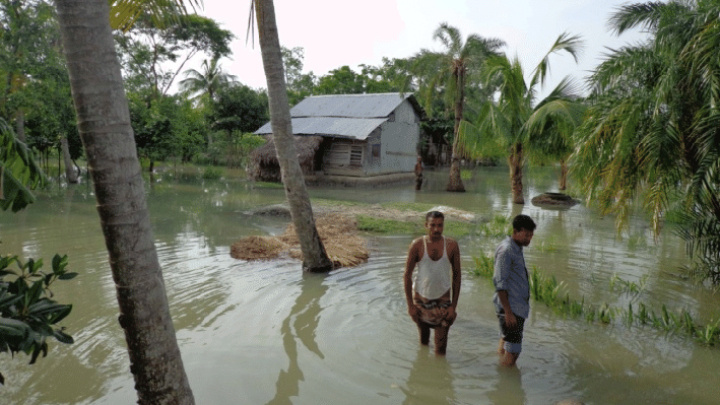 The Lowland areas of Bangladesh Bagerhat, Jhalakathi, Bhola, Satkhira and Khulna districts have been inundated due to the tidal surges caused by the depression over the Bay.

In Bagerhat, the residents of the coastal areas have been suffering a lot for the past three days due to intermittent rainfall, reports UNB.
The water level of Bhairab, Baleshwar, Panguchhi and Pashur rivers increased by two feet from normal ton Monday afternoon while water in Sundarbans was flowing 3-4 feet higher than normal.
The wildlife were seen wandering in search of a safe place.
All the ponds in Sundarbans have overflowed and if the situation continues for more days, the fish enclosures in Bagerhat coastal areas may be washed away anytime.
Meanwhile, a number of fishing trawlers with fishermen have taken shelter at Dublarchar, Narikelbaria and Katka of Sundarbans as the sea is very rough.
Amaresh Chandra Dhali, in-charge of Mongla Weather Conservatory Centre, said the weather office has recorded 21 mm of rainfall in three hours from 6 am to 9 am in Bagerhat.
In Bhola, the water level of many rivers in the district has increased by 2-3 feet above its normal level, rendering 20,000 people marooned.
Besides, the ferry services on Bhola-Laxmipur route have been disrupted as the ghat went under water.
Meanwhile, the residents of Madanpura in Doulatkhan, Char Jahiruddin of Tajumuddin, Dhalchar and Char Kukri-Mukri in Charfassion upazilas and Kolatoli of Manpura upazila of the district have been flooded due to the tidal surge.
Abdus Salam, chairman of Dhalchar union in Charfassion upazila, said the union is home to 12,000 people and they have been passing through untold sufferings for the last couple of days as the river water inundated their residents.
Besides, Mahbubur Rahman, an officer of Bhola Weather Conservatory Center, said 38 mm rainfalls have been recorded in the past 24 hours till Monday noon.
In Satkhira, the inhabitants of the coastal area of the district have been experiencing showers from Monday morning triggered by the depression in the Bay of Bengal.
Already 200 bighas of fish enclosures have been washed away while 62-km of embankment in 35 points of the coastal areas was at risk of collapse.
Shahnewaz Dalim, chairman of Khazra Union in Ashashuni upazila said, 200 bighas of land have been washed away in the upazila.
Masudul Alam, chairman of Gabura union in Shyamnagar upazila, said the flood protection dams at Gabura, Napitkhali, Jelekhali and No 3 Polder areas were at risk of collapse.
Zulficker Ali Ripon, in-charge officer of Satkhira Weather Observatory Centre, said they have recorded 59.7 mm of rainfall in the past 24 hours.
In Jhalakathi, fifty educational institutions, 27 villages and hundreds of houses under Ashrayan project of Kathalia upazila have been flooded as the water of Bishkhali and Halta rivers was flowing 3-4 feet above its normal tide. Besides, the roads along the bank of rivers and Chingrakahli canal dam collapsed, suspending road communications.
According to the sources at Kathalia Upazila Agriculture office, the Aman seedlings may be affected if the water does not recede in the next one or two days.
Meanwhile, 40 percent of fish enclosures and ponds of the upazila have been washed away.
Mizanur Rahman, Kathalia Nirbahi Upazila officer, said all the rivers under the upazila have been flowing above its normal tide, inundating a large number of areas.
In Khulna, the low-lying areas in Paikgachha upazila headquarter in Khulna have been flooded following the collapse of an embankment due to tidal surges on Sunday.
Bangabandhu Chattar, kitchen market area and some other low-lying areas were inundated, causing sufferings to local residents.
The front part of the newly constructed town protection embankment collapsed due to tidal surges caused by depression in the Bay of Bengal.
Locals alleged under the supervision of the Paikgachha Municipal Authority, the dam was constructed in Charbharati area of the Shibsha River in an unplanned manner to protect the municipality from flooding which was inaugurated on April 23 this year.
In just a few days, fish farming started inside of the dam.
A number of trees of the afforestation project implemented around the vast area of Shibshar's Charbharati started to die as the water cannot recede due to construction of the embankment, they said.
Paikgachha upazila nirbahi officer (UNO) Momtaz Begum directed the local municipality to remove the dam. As the dam was not removed, eventually it could not withstand the extra pressure of the tidal surges in Shibshar.