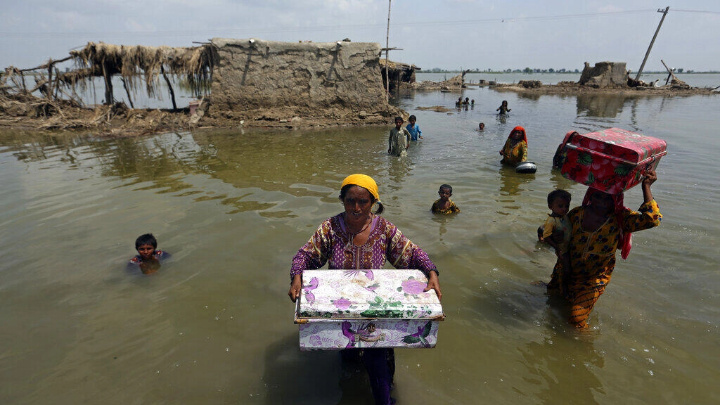 This year's monsoon floods in Pakistan that killed more than 1,300 people are on example of how poorer nations are being made to bear the most devastating impacts of climate change. AP - Fareed Khan

Some 200 nations will be at the annual Conference of the Parties in the Red Sea resort of Sharm el-Sheikh, along with hundreds of observers and NGOs.

"The Egyptian government has imposed arbitrary funding, research, and registration obstacles that have debilitated local environmental groups, forcing some activists into exile and others to steer clear of important work," said Richard Pearshouse, HRW’s environment director.

Such restrictions, HRW added, violated the rights to freedom of assembly and threatened Egypt's ability to uphold its commitments as the host of Cop27 in November.

The rights group said it had gotten its information after speaking to 13 activists, academics, scientists and journalists involved in climate action in Egypt.

Its sources, who remain anonymous, said activists were fearful of drawing attention to issues including industrial pollution and the military's involvement in "destructive forms of quarrying", as well as major infrastructure projects.

It is alleged the country holds some 60,000 political prisoners, many on charges of "spreading false news".

Despite the criticism, Egyptian authorities have pushed for the big-polluting industrialised countries to commit to helping developing African nations to tackle the impacts of climate change.