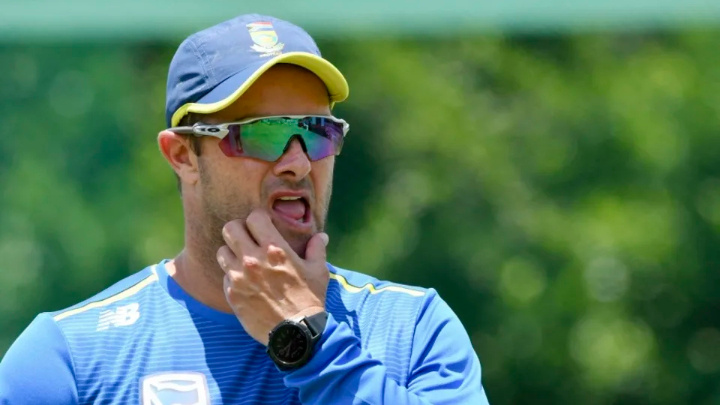 Mark Boucher will leave his role as South Africa men's head coach at the end of the T20 World Cup in Australia, Cricket South Africa has confirmed. Boucher informed the South African team at a meeting on Monday afternoon, at the conclusion of the final Test against England in London.

Boucher has been in charge of the team since December 2019 and led South Africa to 11 Test wins, including a memorable 2-1 home series victory against India in January this year, and took them close to qualifying for the 2021 T20 World Cup semi-final after five successive T20I wins in a row. The team is currently second in the ICC World Test Championship table and has a final chance at a major trophy at this year's T20 World Cup. Boucher's contract was due to run until the 2023 World Cup - which was scheduled for February-March of that year and then moved to October-November.

"We are very surprised and shocked. He told us he wants to pursue other interests and opportunities," Pholetsi Moseki, CSA CEO told ESPNcricinfo. "But we are glad that he will be there to take South Africa to the T20 World Cup."

ESPNcricinfo understands that one of the other opportunities Boucher is looking into is a role as head coach of the MI Cape Town in the new SA20 competition. South Africa's director of cricket, Enoch Nkwe, will begin the process of appointing a new coach soon. It is understood that South Africa may seek an interim coach for their Test series against Australia over the festive season and the home Tests and appoint someone permanently thereafter.

Moseki said: "We would like to thank Mark for the time and effort he has invested in South African cricket as the Head Coach over the past three years. He has helped navigate us through some rough waters following the departures of so many senior players through retirement and has helped lay some strong foundations for the next generation of Proteas. We are extremely grateful to him for the work he has done and would like to wish him well with the next chapter of his career."

Despite the good wishes CSA have extended to Boucher, the organisation has had a rocky relationship with their head coach since his appointment in the 2019-20 summer. Boucher was appointed by former director of cricket (DOC) Graeme Smith and replaced interim team director Nkwe, who was made his assistant and has now taken over as DOC. The pair have since maintained that their relationship is strong and Nkwe also expressed appreciation for Boucher.

"We are deeply saddened by Mark's decision to leave us but we also understand and respect his wishes. He is a Proteas legend and has done so much for the game in our country, both on the field and over the last three years off it, which we highly appreciate," Nkwe said.

"He has built a sound platform for South Africa to flourish in all three formats and I'm sure we will see the results of that at the T20 World Cup next month. He has a settled squad already, one that is growing in confidence, and we look forward to watching them in their important series in India before they head to Australia."

At the time of Boucher's appointment, it was controversial because the coaching post was never advertised - which was later found to be against corporate governance at the Social Justice and Nation-Building (SJN) hearings - and Boucher, who is white, replaced South Africa's first black African head coach, Nkwe. That decision came up as a talking point at the SJN hearings. Smith was later cleared of discrimination as it was found he appointed Boucher on sound cricketing grounds.

Boucher was also implicated at the SJN for his historic role in participating in a racially discriminatory team song (Paul Adams was called a b**** s*** sang to the tune of Boney M's 'Brown girl in the ring' in fines' meetings) and his contemporary handling of racial issues, including the Black Lives Matter movement. South Africa did not take a knee at first, then raised a fist, then gave players the choice between taking a knee, raising a fist or standing to attention and then were directed by the board to collectively take a knee at last year's T20 World Cup. CSA also charged Boucher and he was due to have a disciplinary hearing in May but the charges were dropped when CSA found that they were no longer sustainable.

Throughout the time that Boucher was under scrutiny, he continued to command the support of the national team. Dean Elgar said the constant negativity around the coaching staff impacted the team.

Under Boucher, South Africa's Test team rose from No.7 on the rankings in June 2021, to the top of the World Test Championship points table. They remain out of contention for automatic qualification for the 2023 World Cup, and their chances of making it are slim after they forfeited ODIs in Australia, and they are among the favourites at the T20 World Cup. It is not known whether Boucher's support staff, which includes Charl Langeveldt (bowling), Justin Ontong (fielding) and Justin Sammons (batting), will continue in their roles, as it is likely the new head coach will be able to choose his own staff.