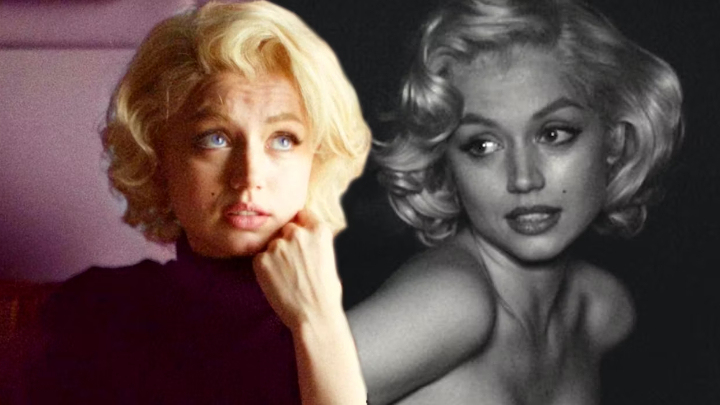 There is a woman at the centre of Andrew Dominik's incendiary Blonde, although it is up to the viewer to determine whether or not this woman is Marilyn Monroe or a figure of interpretation. Adapted from Joyce Carol Oates' fictionalised biography of the actress, the Netflix phenomenon seems to have inhabited the collective film-world consciousness for what feels like more than a decade now. Over the past year, Dominik infamously promised Blonde would "offend everyone", and boldly claimed it would be eternalised as "one of the best films ever made", the enormity of his statements drawing intense anticipation ahead of the film's premiere at the Venice Film Festival.

While it's unlikely that Blonde will be called one of the best films ever made, the boldness of the director's inflammatory remarks is clearly palpable throughout the film, which opens with a young Norma Jeane celebrating her seventh birthday. Her mother (Julianne Nicholson) has a surprise, she giddily tells the girl as she pulls her by the hand. Hanging above little Norma Jeane's bed is a fading black and white photo of a dashing man – her father, the mother whispers.

From this moment onwards, Norma Jeane (played in adulthood by Ana de Armas) dreams of meeting the moustachioed man on to whom she projects all her dreams and fears. His absence is a character in itself, the fateful catalyst to the creation of "Marilyn Monroe", a caricature of a woman who calls almost every man in her life "daddy". The submissive raspiness of her voice robs the noun of its innocent connotation, replacing it with a twisted seductiveness instead. It is a nudge to now-debunked psychological theories such as the Electra complex, Carl Jung's gender-swapped spin on the Freudian concept of Oedipus, a theory that perceives mothers and daughters as in direct competition. As Marilyn falls in and out of love with different men, her father assumes the voice of whoever holds her heart.

Yet, despite the film's tireless emphasis on Marilyn's daddy issues, it is the actress's relationship with motherhood that is the most interestingly layered aspect of Blonde. The actress, who never mothered a child, longs for her belly to swell, to healthily expand to accommodate a thriving baby. Motherhood is not only a natural yearning but a chance to at last disrupt the crippling generational pattern that has turned the mothers in her family against their daughters – a rare stab at redemptive hope.

Cruelly, there is no room in Norma Jeane's body to sustain any creature that isn't Marilyn, the effort to maintain this larger-than-life persona all-consuming. The cruelty of this inescapable reality is eerily captured in Dominik's kaleidoscopic tragedy, relentless in the punishment of the woman at its core. But, then again, Blonde is less preoccupied with building a faithful portrayal of the real-life figure than with translating the brutal ruthlessness of celebrity, holding an uncomfortable mirror up to the people who enjoy dabbling in voyeurism neatly packaged as entertainment.

Being uninterested in objectivity does not alleviate Dominik of the task of faithfully recreating some of Marilyn's most infamous moments. An impressive feat of costume and production design, Blonde applies surgical attention to detail, from cinema's most notorious white dress to the neatly stacked books at the house the actress shared with her second husband, playwright Arthur Miller (Adrien Brody). De Armas sports Monroe's iconic beauty mark and pouts her plump lips to the fullest, her perfectly aligned teeth made whiter by Monroe's signature red lipstick. Those visual aids help but are ultimately unable to conceal her heavy-handed performance. De Armas screams and wails, physically translating the agonising misery that permeates the film, but the landing is a little too rough, the nuance needed of the character unfortunately out of her reach.

Blonde marks Dominik's first foray into fiction since his 2012 neo-noir Killing Them Softly. In the decade since, the filmmaker has worked closely with Australian singer and songwriter Nick Cave, capturing his life and creative process in two different documentaries: 2016's One More Time with Feeling and This Much I Know to be True, released earlier this year. The creative partnership between Dominik, Cave and Cave's long-time contributor, Warren Ellis, bears bountiful fruits in Blonde, the second time the director has brought in the duo to pen the score for one of his films (the first being the western The Assassination of Jesse James by the Coward Robert Ford in 2007).

It is in great part due to the soulful empathy of Cave and Ellis's music that Blonde manages to prod at unyielding melancholia without ever needing to resort to a cheap tugging of emotional heartstrings. When Norma Jeane stumbles upon a calming love, the skin-tingling synthesiser beats employed to mark the pace of the woman's sexual escapades give way to the stirring falsettos of Nick Cave and the Bad Seeds' Bright Horses, a song that plays like a hymn, written in memory of Cave's late son. It foreshadows the imminent sorrow doomed to drown all sense of joy and, still, for a brief moment in time, one gets a glimpse of what could have been.

"And the fields are just fields and there ain't no Lord, and everyone is hidden and everyone is cruel," sings Cave, a fitting encapsulation of this hellish rereading of the myth of Marilyn Monroe. Far from faultless in its disquieting gaze, Blonde's greatest merit is its frankness – it tells you what it is about to do and then does it. It is a poignant framing for a film about a woman who lived her entire life denied that predictability.

Blonde is released on Netflix in the US on 28 September.