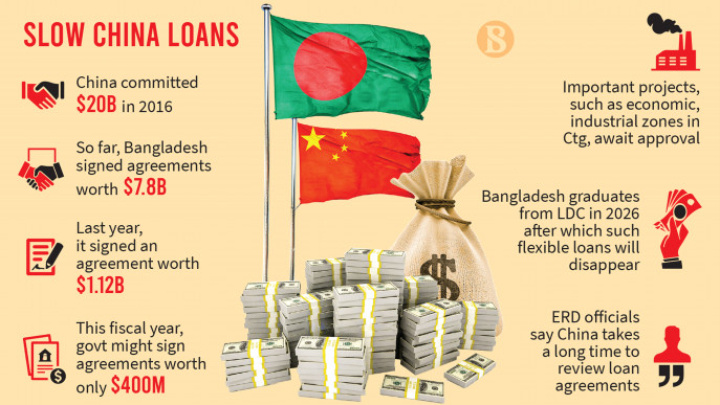 China is going slow in materialising its loan pledges for Bangladesh, with signing only two projects worth $400 million in the current fiscal year, Economic Relations Division (ERD) officials said.

In the last fiscal year, only one project was signed for a $1.12 billion Chinese loan.

With these, the loan deals amounted to $7.8 billion for 27 projects since the Asian powerhouse had pledged $20 billion loans under the Strengthening and Production Capacity Cooperation scheme signed in 2016 during the Dhaka visit of  Chinese president Xi Jinping.

ERD officials, who find Chinese loan offers flexible, said the deals for the $20 billion loan were supposed to be concluded in five years since the offer was made. But the Chinese authorities seem to be going slow, which made officials worried about the prospect of getting the pledged low-cost loan before 2026 – the year Bangladesh is set to graduate from LDC and will have to pay higher cost for borrowing.

Officials, however, hoped that $4 billion more may be approved for 10 projects in the next four years before that deadline.

This fiscal year, the ERD data shows the country can get a loan of $400 million for just two projects: Rajshahi Wasa's surface water treatment plant and the establishment of six full-fledged TV stations of the Bangladesh Television.

These two projects have loan proposals of $276.25 million and $125.12 million respectively.

Earlier in the last fiscal year, a loan agreement of $1.12 billion was signed with China for only one project. The loan agreement was signed four years after the project was approved at a meeting of the National Economic Council Executive Committee (Ecnec) meeting.

Meanwhile, several important projects such as the Chinese economic and industrial zones in Chattogram and the Teesta River Comprehensive Management and Restoration project have been awaiting loans for a while.

With graduation from the Least Developed Country (LDC) status, Bangladesh will no longer be eligible for LDC-specific special and differential treatment, including such flexible loans.

With time running out, the government, however, is optimistic of securing Chinese finance for several projects in the next four years.

Notable among the agreements signed so far are the Padma Rail Bridge Link Project, Expansion and Strengthening of Power Distribution System in DPDC Areas, Construction of Tunnel under Karnaphuli River, and Installation of Single Point Mooring.

Aside from the last two projects, four more are in the pipeline by 2026.

ERD officials, however, fear that after Bangladesh's graduation in 2026, access to such flexible loans will decrease. If loans at a low interest can be obtained now, the better it will be for the country.

The Business Standard reached out to ERD Secretary Sharifa Khan who refused to comment on the matter.

But, an ERD official on the condition of anonymity said China's loan approval process took a long time as each application was reviewed at the highest level of that country. As a result, the loan approval was delayed.

Meanwhile, China had agreed to provide loans for important projects like the Padma Rail Link and  Dhaka Ashulia Elevated Expressway.

Similarly, the construction of TV stations in six divisional towns and the Akhaura-Sylhet railway project were also approved by the government about three years ago, but  the final loan decision has not yet been confirmed.

The loan proposal for the Rajshahi Wasa surface water treatment plant project was sent to the Chinese authorities on 13 April 2021, ERD officials said.

It is now being reviewed, and the ERD expects to sign the commitment with China by December this year.

The proposal for the six TV stations was sent in December last year and is expected to be signed after review by March next year.

Ahsan H Mansur, executive director of the Policy Research Institute of Bangladesh, said, China's project costs are high, but the country's terms and conditions for loans were not that bad.

"The more flexible a loan, the better it is for us. We won't be able to get flexible loan opportunities for long, so we have to be careful in selecting projects," Ahsan Mansur said, cautioning that projects that may become burdens in the future should not be taken up.

"We have to take projects that will be economically profitable. We are not yet in China's debt trap situation. If we are careful in choosing the projects, we will not get into such a trap," he said.

The work on the Chinese Economic and Industrial Zones in Chattogram on 783 acres of land in Anwara has stalled for five years.

Last August, a memorandum of understanding was signed with the Bangladesh Economic Zone Authority (BEZA) and the Chinese company China Road and Bridge Corporation to establish the zone.

But according to ERD sources, the loan agreement for the project is unlikely to take place before 2025.

Preliminary application was sent to the Chinese Embassy on 12 September, 2018 and supplemental documents on 22 January, 2020. It is said that no response has been received from China yet.

On the other hand, the Teesta River Comprehensive Management and Restoration Projects project is expected to receive $725 million in Chinese loans. The proposal for this project is still under review by the Chinese government. ERD is working on a loan agreement for the project by 2025.

In September 2016, the Water Development Board signed an MoU with the Power Construction Corporation of China to conduct a technical assessment, make detailed designs and undertake the construction of the project.

The MoU was also supposed to help Bangladesh procure a loan from China.

The government expects to reclaim 170.87 square kilometres of land from the Teesta by dredging its main channel. At the same time, it plans to build dams on a needs-based approach.

The land that is planned to be reclaimed is worth $1,570.84 million, while the value of properties that the newly built dams will save is estimated to be $1,346.02 million.

The total benefit accruing from the project will be $2,916.89 million.

China is expected to lend $1.27 billion for the project. ERD officials said the loan agreement could be in place in 2024.