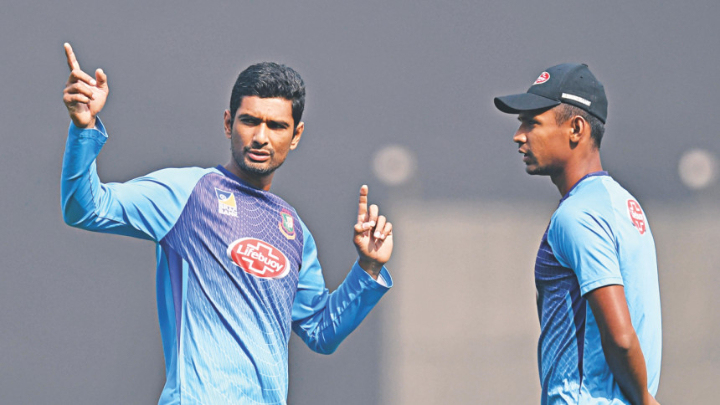 National selectors will sit with the newly-appointed T20 technical consultant Sridharan Sriram to discuss their road map for the upcoming ICC T20 World Cup, scheduled in Australia in October.

Bangladesh think tanks are also expected to chalk out their squad for the upcoming T20 tri-series involving Pakistan and host New Zealand which will mark the end of their preparation for the global tournament.

Sriram, who arrived in the city on Sunday, will also be conducting a camp apart from sitting with the selection panel.

The three-day training camp involving national team players and some selected cricketers from the BCB HP team and Bangladesh Tigers programme will commence at the Sher-e-Bangla National Stadium, Mirpur today.

The 30-member squad will have match scenario practice sessions during the three-day camp.

The BCB organized the short camp for Sriram to have a look at the available players for the shortest format.

It was learnt that several cricketers from the national set-up might miss the camp though selector Habibul Bashar said that there is nothing to be worried about with this move considering this is not a trial camp.

“If someone is missing from the camp, there is no reason to think he is out because this is not a trial camp,” said Habibul.

There is a lot of speculation going around regarding the future of Mahmudullah in the shortest format and whether he will be part of the upcoming ICC T20 World Cup squad is yet not cleared.

However, a section of the team management is certainly concerned regarding his batting form, precisely his batting approach.

The return of Yasir Ali along with Nurul Hasan Sohan and Liton Das, who missed the Asia Cup due to their respective injuries, made his position vulnerable in the team considering his innings lacked the firepower that was required at the end though he got start in the recent times.

The form of Mahmudullah is a major concern considering he was released from the captaincy job after a prolonged lean patch with the bat.

The team management even rested him from the T20Is against Zimbabwe and he only returned in the series following the injury of Liton and Nurul.

Since his last fifty against PNG in the ICC T20 World Cup Qualifier, Mahmudullah played 16 innings without any half-century but what irked the management the most was how he spoiled his chances after getting a start in his last three T20Is respectively against Zimbabwe, Afghanistan and Sri Lanka.

Against Zimbabwe, he made run-a-ball 27 while against Afghanistan he scored 25 runs from 27 balls.

In the do-or-die game against Sri Lanka, the right-handed batsman scored 27 runs from 22 balls but that was hardly enough for them.

Many felt that he should have finished off the game rather than going out at the crucial time considering he was well set and if he was around, another 20 runs could have been added to the board that would have been beyond the reach of the Lankans.

“His batting is a concern and we need to talk with him about his batting approach because if someone batted in the middle-order and passed a substantial amount of time, we expect him to finish off the game for us,” said a member of the team management.

Meanwhile, the team management will also sit with Liton as they are thinking of playing him at number four instead of at the top considering they want someone in the middle-order who can attack the ball from the very beginning.

Liton, who only played twice at number four so far in his career in the shortest format, might be seen in this position that went vacant following the retirement of Mushfiqur Rahim.

Liton batted in the top three for the most part of his 54-match T20 career as he opened the innings on 40 occasions where he made 819 runs with an average of 21.

At number three, he played seven innings making 187 runs at an average of 26.71. However, he failed to perform at number four scoring only seven runs in the two matches that he played so far in that position.

“We are planning to play him at four though a final decision is yet to be taken in this regard,” chief selector Minhajul Abedin told The Daily Sun.

The move to demote Liton down the order implies that the think tanks might go with one or even two make-shift openers in the upcoming T20 assignments.