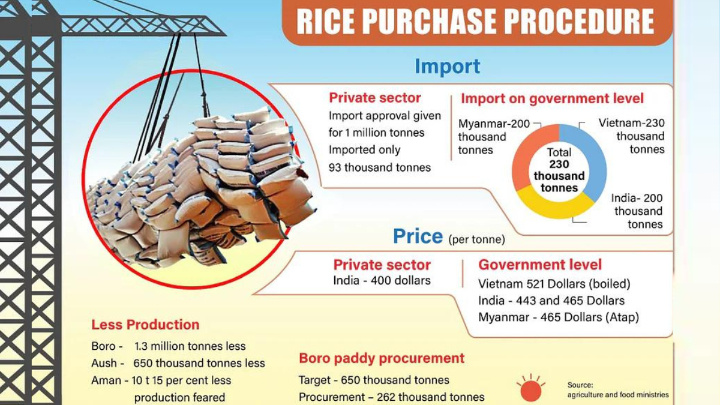 In the wake of crisis as the target of production of boro, aus and amon has not been fulfilled, the government has planned to purchase rice in higher price than the international market.

After checks and cross-checks by the food ministry, the cabinet committee on government purchase has approved proposals to buy 6,30,000 tonnes of rice from Vietnam, India and Myanmar. The government is set to sign agreements with three countries to purchase rice.

The same quality of rice is being purchased from Vietnam at 78 dollars higher per tonne than that of the price in India. Generally, there is a gap of 20 to 40 dollars in rice price between two countries.

When asked about the matter, speaking to Prothom Alo, food secretary Ismail Hossain said the global food market is instable.

As there is a fear of prices shooting up within several months, he said the government is purchasing rice and wheat after much scrutiny and checking.

According to the fortnight report of the food ministry, the export price of rice in India was 375 dollars per tonne while 394 dollars in Pakistan. The price was 385 dollars in Vietnam and below 400 dollars in Thailand.

On the contrary the food secretary alleged that those who are campaigning that the price is being purchased in higher price, may have certain motives.

Former adviser to the caretaker government and agriculture secretary AMM Shawkat Ali said such allegations were raised earlier to purchase food. Food should be procured at a cheap price in such a crisis moment of the country, he said, adding the matter should be investigated at to why the government is purchasing rice at higher prices if the businessmen can buy at lower prices.

Firstly, those, who failed after trying to benefit by importing rice, may make such an allegation. Secondly, they are little aware of the international market. Thirdly, people are unable to tolerate the fact that the government is purchasing rice at a low price from abroad to ensure food security despite such a critical situation.

Earlier, the government started a process to purchase wheat from Russia at 50 dollars higher per tonne than the international market. The media ran reports on this.

It is a matter of relief that there is adequate stock of rice and wheat in the government warehouse.

According to the estimation of the food ministry, there is a stock of 174,000 tonnes of rice and 135,000 tonnes of wheat in the stock.

So the move to purchase rice in a hurry has given rise a question.

The agriculture and food ministries and government high-ups fear the price of rice may increase in November and December due to low production of boro, aus and aman. So steps have been taken to import one million tonnes of rice and wheat to build additional food stock.

One of the top importers, Mazumder Traders, supplied 50,000 tonnes of rice to the government after importing from India in July. They are importing 50,000 tonnes more from India. The price including transport costs stands at about 400 dollars.

Speaking to Prothom Alo, three top importers said they are importing rice between 380 and 400 dollars per tonne. Those who have opened Letters of Credit (LC) this month, are purchasing rice at 400 dollars.

However, the government is purchasing rice at 465 dollars per tonnes at the government to government level. As a result, the Indian exporters in the private sector are raising price. So the businessmen are unable to make profits importing rice from India.

Owners of Mazumder Traders, Chitta Mazumder, said, "The government is purchasing rice in higher price from the Indian state agency, which is not clear to us."

Food ministry sources said parboiled rice at 521 dollars and atap rice at 494 dollars are being purchased from Vietnam. The process of purchasing rice is going on from Vietnam's state agency Vina-2. Vietnam will supply atap rice from their own country and they will export per boil rice after purchasing from Thailand.

Vina-2 Bangladesh representative and Shanewaz Trading managing director Sad Ahmed said the quality of Vietnam rice is good. The rice market is instable in the global market. The process of signing an agreement underway at that price so that Bangladesh certainly gets rice.

About exporting rice after purchasing from Thailand, Saad Ahmed said the matter is in the government's agreement with Vena-2.

About purchasing rice from Thailand through the third country, food secretary Ismail said, "We have contacted Thailand several times to buy rice, but as they did not respond, rice is being purchased from Vietnam."

An agreement is to be signed to purchase rice at 465 dollars per tonne from Myanmar's government controlled farmers association Myanmar Rice Federation (MRF).

When asked the matter, former adviser to the caretaker government and agriculture secretary AMM Shawkat Ali said such allegations were raised earlier to purchase food.

Food should be procured at a cheap price in such a crisis moment of the country, he said, adding the matter should be investigated at to why the government is purchasing rice at higher prices if the businessmen can buy at lower prices.

According to Bangladesh Rice Research Institute, the production of boro has been 13 tonnes less than target. The target of aus was 2.7 million tonnes, but the production was 20,50,000 tonnes.

In comparison to the previous years, there has been 40 per cent of rain this year. So the experts fear that production of aman will be 10 to 15 per cent less. The harvest of aman paddy will start in November.

Naogaon rice wholesaler and trader association president Nirod Boron Saha said, "The production has been less during the last boro season. There is a fear of a deficit in aman production.

As the production has been low, the government target to collect boro has not been fulfilled, he said adding the information available from the field is that the quality of aman will not be expected. "So the government has to import rice to increase stock."

Collection less, import at the private level not good

According to the food ministry, the government set a target to purchase 600,000 metric tonnes of rice during the last boro season. Only 262,000 tonnes were collected. However, the target of purchasing 11,00,000 tonnes of rice has been fulfilled to a great extent.

The government decreased the tariff from 25 per cent to 5 per cent on 28 August to import rice. On condition, other duties were also lowered. But meanwhile, the Indian government imposed 20 per cent on the export of rice except basmati.