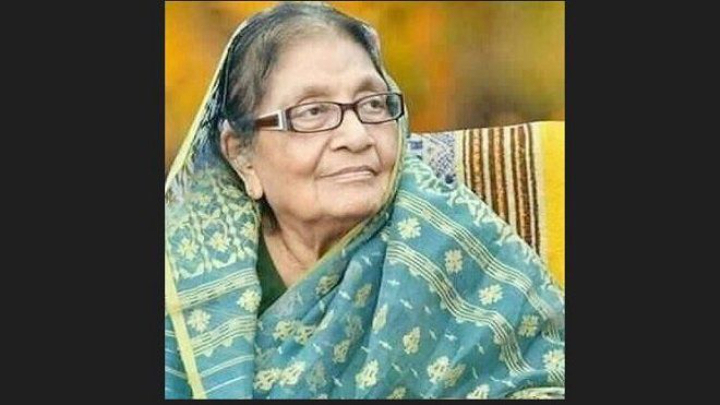 Deputy leader of Jatiya Sangsad (national parliament) Syeda sajeda Chowdhury has passed away. She died at Dhaka’s Combined Military Hospital (CMH) at around 11.40pm on Sunday.

Sajeda Chowdhury was a valiant freedom fighter and a noted organiser of the Liberation War. She was a presidium member of ruling Awami League. She had been elected member of parliament multiple times from Faridpur-2 constituency.

Sajeda Chowdhury had been ailing for a few years. She was admitted to CMH last week. She is survived by three sons and a daughter. Her husband Golam Akbar Chowdhury died in November, 2015.

Sajeda Chowdhury’s body will be taken to her electoral constituency, Nagarkanda in Faridpur on Monday afternoon.

Following her namaj-e-janaza there, her body will be brought back in Dhaka. There will be a janaza in Dhaka at the south plaza of Jatiya Sangsad. She will be buried at Banani graveyard in the capital, said her assistant personal secretary (APS) Md Shafiuddin Chowdhury.

The veteran politician was born in 1935. Sajeda Chowdhury got involved in politics with Awami League in the 50s. In the critical moment following the assassination of Bangabandhu Sheikh Mujibur Rahman along with his family on 15 August, 1975, she played a key role in keeping Awami League organised.

When Awami League came to power in 1996, Sajeda Chowdhury served as the forest and environment minister.