The US president has visited each of the sites where hijacked planes crashed in 2001, honoring the victims of the devastating attacks 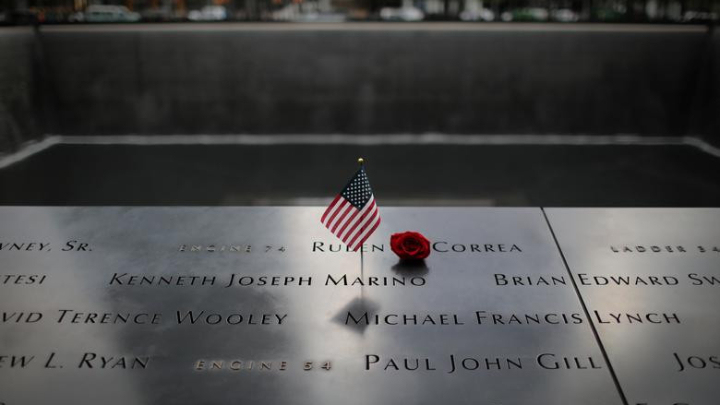 An American flag and red rose stand in the names of those lost at the edge of the south reflecting pool of the 9/11 Memorial & Museum ahead of the 20th anniversary of the 9/11 attacks in Lower Manhattan in New York City, September 8, 2021 Reuters

People around the world commemorated the 9/11 terrorist attacks, which left 2,977 people dead in 2001.

The US president visited the Pentagon at the end of his busy schedule commemorating the attacks of September 11, 2001.

The president saluted as a bugler played Taps, the US military funeral tune along with his wife First Lady Jill Biden.

Vice President Kamala Harris and her husband Doug Emhoff stood alongside Biden as he laid a wreath at the Pentagon 9/11 memorial to mark the place where 125 people lost their lives.

The US president has now visited each of the sites where hijacked planes crashed in 2001, honoring the victims of the devastating attacks

"We never forget the children who have grown up without parents. Parents who have suffered without children. Husbands and wives who had to find a way forward without their partners. Brothers, sisters, loved ones. Jill and I hold you close in our hearts," tweeted Biden earlier in the day.

Biden began the day in New York, where he and first lady Jill Biden attended a ceremony at the site where the World Trade Center's twin towers once stood before planes struck the buildings and caused them to collapse.

They then flew to Shanksville, Pennsylvania, where the president laid a wreath at the Flight 93 National Memorial, where names of the deceased are etched on a marble wall.

In the last few minutes, Biden visited the Pentagon, the symbol of US military might that was pierced by another of the planes that were used as missiles that day.

The president was not scheduled to deliver remarks at any of the sites. He released a video on Friday to express his condolences to the loved ones of the victims and highlight the national unity that resulted, at least initially, after 9/11.

Joseph Dittmar was in the South Tower of New York's World Trade Center when the first hijacked plane hit the North Tower. He managed to get out by running down 105 flights of stairs.

He told DW what happened when the plane struck: "The fire stairwell that we were inside, the concrete bunker started to shake so violently from side to side, the handrails breaking away from the wall, the concrete spidering out, the steps were like waves in the ocean under our feet."

He then described a "heat ball blowing by as we smell jet fuel… This stairwell is just rocking back and forth. It felt like forever, it was seconds, maybe a minute. When it settled, you would have thought there would have been pandemonium, but we responded with just stunned silence."

Dittmar said those who got out are still haunted by the attacks, 20 years on: "We see, hear, smell, feel this every day and it's something that's in our hearts and souls. In order to move forward, we have to manage it, we need to be strong and powerful as we can," he said.

Al-Qaeda released a new video of the terror group's leader Ayman al-Zawahiri on Saturday – the 20th anniversary of the 9/11 attacks. The one-hour video was an apparent bid to refute rumors about al-Zawahiri's death after reports emerged in November suggesting he had died of natural causes.

During the video, he mentions the US withdrawal from Afghanistan but does not mention the Taliban's recapture of Kabul.

Al-Zawahiri was named the head of the terrorist group in 2011 after Osama bin Laden was killed by US special operations forces at his hideout in Pakistan.

European leaders have sent messages of support to the United States, saying the 9/11 attackers had failed to destroy Western values. European Commission President Ursula von der Leyen paid tribute to "those who lost their lives" as well as "those who risked everything to help them."

German Chancellor Angela Merkel admitted that the war on terror had "not achieved all our goals."

Referring to the Taliban takeover of Afghanistan, she added: "That is why it is important for us on the German side to safeguard what we have been able to achieve, education for girls and the like, although we know that this will not be easy with the Taliban."

UK Prime Minister Boris Johnson said that the jihadis had "failed to shake our belief in freedom and democracy. They failed to drive our nations apart, or cause us to abandon our values, or to live in permanent fear."

NATO Secretary-General Jens Stoltenberg paid his respects to the victims of 9/11 and said the alliance would keep countering the threat of global terrorism.

George W Bush, who was president when the 9/11 attacks unfolded, said that today's disunity made him feel "worried" about the future of the United States. "In the weeks and months following the 9/11 attacks, I was proud to lead an amazing, resilient, united people," Bush said in Pennsylvania.

Canadian Prime Minister Justin Trudeau offered his condolences and praised the heroes of 9/11. "Nearly 3,000 people lost their lives on September 11, 2001. Twenty years later, we remember them, and the incredible sacrifice and bravery of the first responders. My thoughts are with the survivors and loved ones whose lives were changed forever that day," he tweeted.

Russia said it was ready to resume anti-terrorism cooperation with the US. In a statement released by Moscow's diplomatic mission in Washington, Ambassador Anatoly Antonov said Russia was grieving together with the US and proposed reviving cooperation in the fight against terrorism problems in bilateral ties.

Former President Barack Obama hailed the heroes of 9/11. "One thing that became clear on 9/11, and has been clear ever since is that America has always been home to heroes who run towards danger in order to do what is right,'' said Obama. He also referenced the effects of climate change in his speech.

"A decade ago when, after years of persistence, our military brought justice to Osama bin Laden. And we're seeing it today, in the doctors and nurses, bone tired, doing what they can to save lives; the service members, some of whom weren't even born 20 years ago, putting themselves at risk to save Americans and help refugees find a better life, the first responders battling roaring fires and rising waters to bring families to safety,'' he added.

Unconfirmed reports had circulated all week that the Taliban may use the anniversary of Sept 11 to swear in their new government, but the day unfolded without formal recognition.

"This is a day for America, not for Afghanistan," Muhammad Alzoad, a bank clerk, told AFP. "This was nothing to do with Afghanistan, but it made us suffer.”

The attacks against the United States were planned by al-Qaeda chief Osama bin Laden, who had taken refuge in Afghanistan after the Taliban took power in 1996.