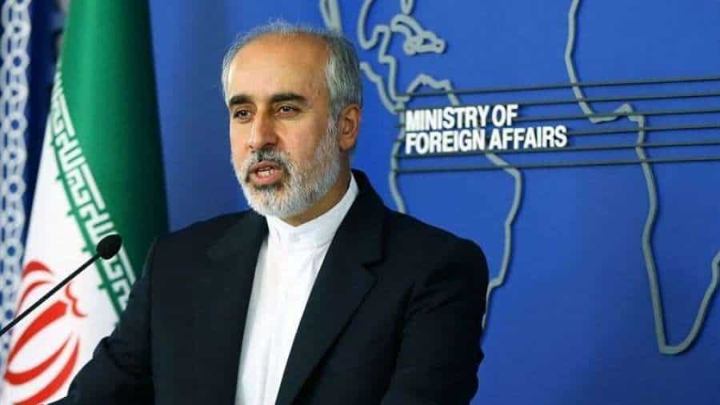 The latest statement by Britain, France and Germany saying they had "serious doubts" about Iran's intentions to revive a 2015 nuclear deal is "unconstructive" and "in breach of goodwill," the Iranian Foreign Ministry said Saturday in a release posted on its official website.

"It is surprising and regrettable that under the current circumstances when diplomatic interactions and exchange of messages continue between the negotiating sides and the coordinator of the Vienna talks to finalize the negotiations, the EU troika issues such a statement in a move that deviates from the path of the fruitful approach during the talks," Iran's Foreign Ministry spokesman Nasser Kanaani was quoted as saying.

Referring to the "goodwill and serious resolve" of Iran to finalize talks on the revival of the Iranian 2015 nuclear deal, formally known as the Joint Comprehensive Plan of Action (JCPOA), he warned the European sides "against being influenced by propaganda waged by third parties that were against the negotiations from the very beginning and are now making their utmost to cause the talks to fail."

The spokesman also cautioned the European countries against resorting to threats.

"All those who ignorantly think they, through threats and sanctions, can dissuade the Iranian people from fully pursuing their rights and achieving their interests must draw a lesson from the U.S.'s maximum defeat in its maximum pressure campaign," Kanaani stressed.

He underscored Iran is still ready to finalize a deal. Kanaani said he believes that an agreement can swiftly be reached if the other sides avoid being influenced by outside pressures.

On Saturday, France, Germany and Britain said in a joint statement that Iran "has chosen not to seize this critical diplomatic opportunity" given by a recent EU-submitted "final set of texts" to rescue the nuclear pact, voicing their "serious doubts as to Iran's intentions and commitment to a successful outcome on the JCPOA."

Iran signed the JCPOA with world major countries in July 2015, agreeing to curb its nuclear program in return for removing sanctions on the country. However, former U.S. President Donald Trump pulled Washington out of the agreement and reimposed unilateral sanctions on Tehran, prompting the latter to drop some of its commitments under the pact.

The talks on the JCPOA's revival began in April 2021 in Vienna but were suspended in March this year because of political differences between Tehran and Washington.

The latest round of the nuclear talks was held in Austria in early August after a five-month hiatus. On Aug. 8, the EU put forward its "final text" of the draft decision on reviving the JCPOA.

Iran and the United States have recently indirectly exchanged views on the EU proposal.