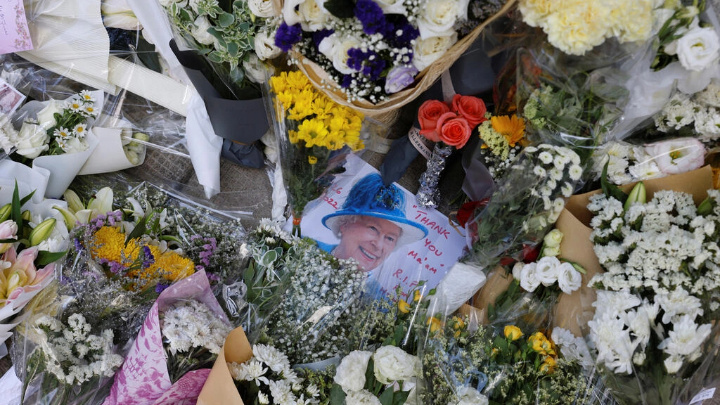 Flowers are pictured to next to a picture of Queen Elizabeth outside the British Consulate-General, after she died aged 96, in Hong Kong, China September 9, 2022. REUTERS - TYRONE SIU

Britain's Queen Elizabeth II embarks on her final journey on Sunday with thousands of her mourning subjects expected to line her coffin's route from the Scottish retreat where she died.

The solemn departure of the queen's oak casket from Balmoral Castle for Edinburgh marks the start of an odyssey of national mourning culminating in her state funeral in London on September 19.

Her journey begins a day after her son Charles III was formally proclaimed king, and after her warring grandsons William and Harry, and their wives Kate and Meghan, briefly reunited for a walkabout. 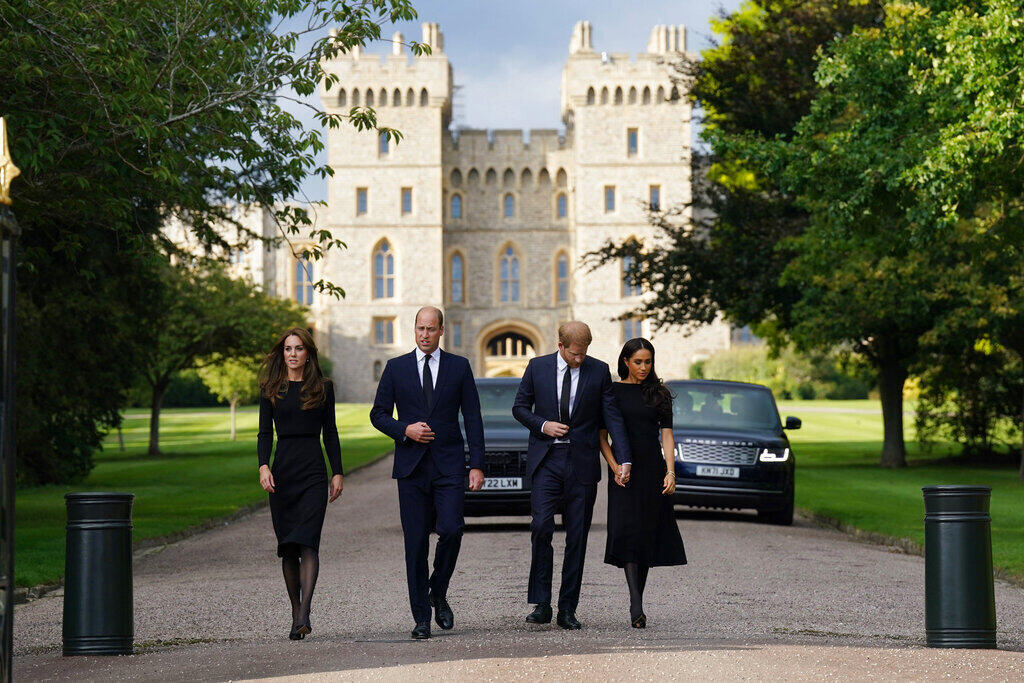 From left, Kate, the Princess of Wales, Prince William, Prince of Wales, Prince Harry and Meghan, Duchess of Sussex walk to meet members of the public at Windsor Castle, following the death of Queen Elizabeth II on Thursday, in Windsor, England, Saturday, Sept. 10, 2022. AP - Kirsty O'Connor

A hearse carrying the coffin of Britain's longest-serving monarch will make a six-hour journey through Scottish towns before arriving in Edinburgh, where it will rest for two days so people can pay tribute.

The king himself will then travel to Edinburgh on Monday for a prayer service, before the body of the queen, who died at Balmoral on Thursday aged 96, is flown to the capital on Tuesday.

She will then lie in state for four days in an event expected to draw at least a million people, ahead of a funeral set to be watched worldwide and draw numerous heads of state.

The State Funeral of Her Majesty The Queen will take place at Westminster Abbey on Monday 19th September.

Prior to the State Funeral, The Queen will Lie-in-State in Westminster Hall for four days, to allow the public to pay their respects.

"We are living in history right now," said Laura Burns, 49, who was planning to try to see the queen's coffin passing in Edinburgh after coming to the city because her son is starting at university.

"It's a very respectful atmosphere," she told AFP.

While Charles' accession has pushed Britain into what newspapers have called the new "Carolean" era, Britain and the royal family are still coming to terms with the end of the Elizabethan age.

Prince William broke his silence with an emotional tribute to his beloved "Grannie" on Saturday.

But the queen's death also brought a surprise show of unity from William, 40, and his younger brother Harry, 37, when they emerged with their wives to speak to well-wishers outside Windsor Castle, near London. 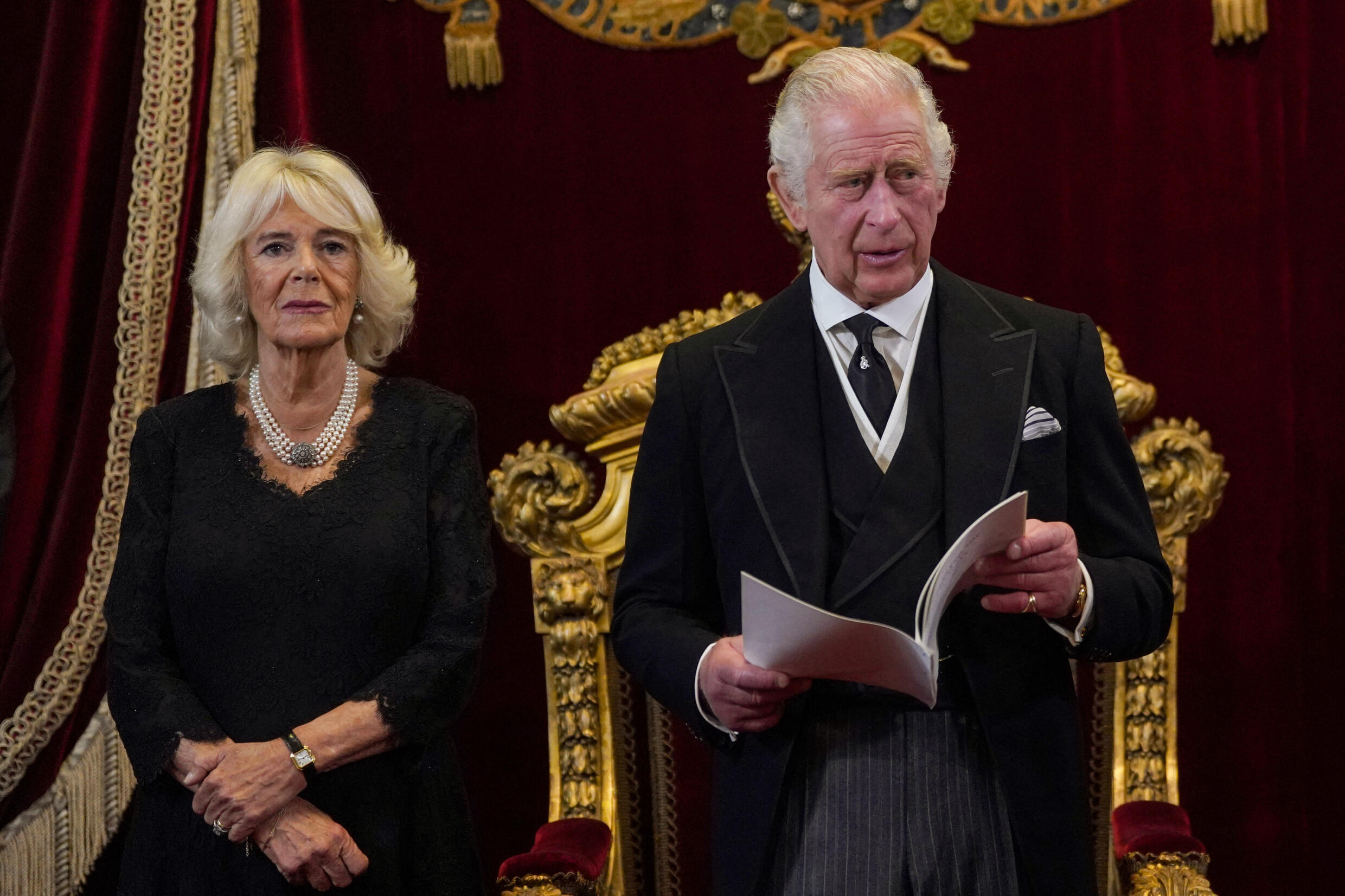 Britain's Camilla, Queen Consort (L) listens as Britain's King Charles III speaks during a meeting of the Accession Council inside St James's Palace in London on September 10, 2022, to proclaim him as the new King. - Britain's Charles III was officially proclaimed King in a ceremony on Saturday, a day after he vowed in his first speech to mourning subjects that he would emulate his "darling mama", Queen Elizabeth II who died on September 8. AFP - VICTORIA JONES

The sight of the two couples who have barely seen each other since 2020, together -- even if they separated to speak and shake hands with different sides of the cheering crowds -- will likely spark rumours of a reconciliation.

Pictures of the four were splashed on the covers of Sunday's newspapers.

"Reunited for granny," read the Sunday Mirror's headline, while the Telegraph ran with "Reunited in sorrow" and the Sun with "All 4 One".

The Sunday Times focussed on the apparent frostiness, with the headline: "Warring Windsors' awkward truce to honour the Queen".

Senior royals including the queen's children, Princess Anne and Princes Andrew and Edward and their families also inspected flowers outside Balmoral, where they have remained since the queen's death.

The queen's coffin, draped with a Scottish Royal Standard and floral wreath, has been kept in Balmoral's ballroom and will be carried to her hearse by six estate gamekeepers.