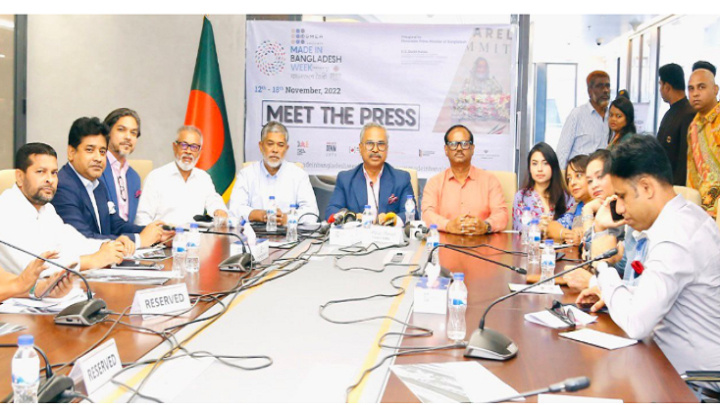 Bangladesh Garment Manufacturers and Exporters Association (BGMEA) has requested the government to make special arrangements to ensure uninterrupted supply of gas and electricity to the export-oriented factories in an effort to keep production unhurt.

BGMEA President Faruque Hassan made the request recognizing the energy crisis globally and its impact domestically including on the readymade garment industry.

He was speaking at a press conference at the BGMEA Complex which was arranged to brief the media about the “Made in Bangladesh Week.”

“Made in Bangladesh Week” will be organized by the BGMEA in partnership with Bangladesh Apparel Exchange (BAE) on November 12-18 to showcase the impressive stories of Bangladesh apparel industry as well as its continuous strive to pursue excellence.

Prime Minister Sheikh Hasina is scheduled to open the “Made in Bangladesh Week” on November 13.

The BGMEA President said the industry witnessed uninterrupted growth over the last one year – August 2021 to August 2022.

Faruque Hassan said the retailers have been struggling to adapt with the growing inflation and many brands are witnessing a declining trend of sales which ultimately increased their unsold stocks.

“Considering all these things, our exports might witness a negative trend in the coming months,” said the BGMEA chief.

The government imposed 1 percent source tax on export profits for the current fiscal. The BGMEA chief requested the government to keep it like the previous year (0.5 per cent).

It is a signature event of Bangladesh which is the world’s second largest apparel exporting country. The country exports ‘Made in Bangladesh’ apparel to over 160 countries in the world.

The ‘Made in Bangladesh Week’ aims to bring under one roof all the stakeholders of Bangladesh apparel industry to initiate collaborations as well as discuss prospects and roadmap for the future.

In addition, the event will work towards a collective promise of promoting sustainability and responsible business.

The week, alongside showcasing the strength of the country’s apparel industry, aims to identify future priorities and scopes of collaboration among the stakeholders to ensure Bangladesh remains as a preferred destination for global apparel sourcing, BGMEA said.

Made in Bangladesh Week will be a milestone event for Bangladesh apparel industry, it said.

Recognizing the importance of strengthening Bangladesh’s presence in the global fashion market and to initiate a greater collaboration with the global stakeholders for sustainable manufacturing and sourcing, BGMEA and BKMEA pursued IAF to organize the 37th World Fashion Convention in Bangladesh.

IAF has agreed to that proposition and the 37th World Fashion Convention will be hosted in Bangladesh in collaboration with BGMEA and BKMEA during 12-15 November 2022 at Radisson BLU Dhaka.