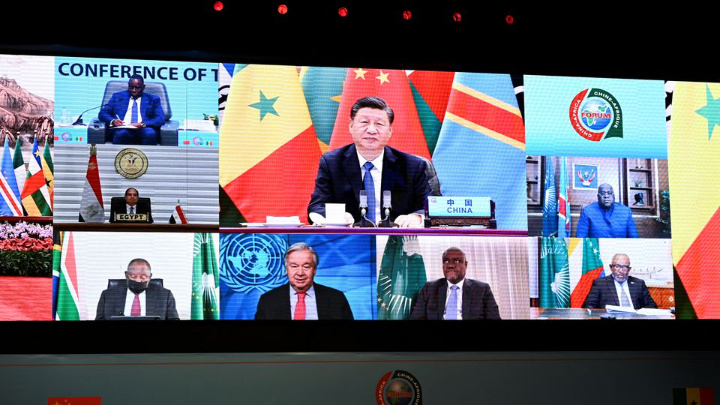 In August, China's ambassador to Zambia took to the stage at a new conference centre in the capital Lusaka, which he called "a gift from the Chinese government to our Zambian friends", to speak about lending to the debt-laden southern African country.

China is the world's largest bilateral lender but discloses little on lending conditions and also on how it renegotiates with borrowers in distress, so interest in how it handles Zambian debt is intense, particuarly as more countries such as Sri Lanka struggle to repay loans.

Leaders of the Group of Seven rich democracies have called on China specifically to take a more active role in helping strained countries overhaul their debt burdens.

Shortly after ambassador Du Xiaohui's Lusaka speech, China confirmed it had forgiven 23 interest-free loans to 17 African countries, making good on a pledge by President Xi Jinping at the 2021 Forum on China-Africa Cooperation (FOCAC). China said the loans had matured but did not give further detail.

The announcement was welcome, but interest-free loans make up a tiny portion of China's lending to the continent. African governments treat them like grants anyway so there was little surprise, according to researchers and government officials.

This kind of debt forgiveness, which China has done for more than two decades, masks a harder stance on restructuring for the bulk of its lending to developing nations under its Belt and Road Initiative (BRI) launched in 2013, said analysts.
"It's the lowest hanging fruit," said Hannah Ryder, chief executive of Development Reimagined, an African-owned development consultancy headquartered in Beijing.

"There is more that China could do." China generally does not disclose lending terms, while debt relief usually comes through maturity extension or new lending rather than write-downs.

"China has long provided various kinds of assistance, including interest-free loans, to Africa within its capacity, and actively supported the economic and social development of African countries," a Chinese foreign ministry spokesperson told Reuters in a written statement. It did not respond to a question on how much the 23 forgiven loans were worth in total.

Interest-free loans account for less than 5% of the $843 billion in Chinese loan commitments to 165 governments globally between 2000 and 2017 tracked by research lab AidData.

Progress got off to a glacial start on restructuring Zambia's $17 billion of external debt - Africa's first pandemic era default - through the Common Framework set up by the Group of 20 major economies in 2020. Sources involved in the process have blamed China for the delay.

China's foreign ministry denied this, saying it "does not correspond to the facts".

"China has played a positive role in Zambia's debt restructuring. It was through China's promotion that the creditors committee was able to successfully hold two meetings," it said in a written response to Reuters.

The second meeting resulted in a restructuring commitment and paving the way for the IMF to sign off on a $1.3 billion lending programme. However, the relief offered by each creditor is still being negotiated.

China may push for long maturity extensions to its $6 billions loans to Zambia rather than accepting writedowns, a source with knowledge of the negotiations said.

"The choice between haircuts and stretching the repayment period... is a matter of negotiations," Zambia's finance minister Situmbeko Musokotwane told a news conference last week, declining to comment on China's role specifically.

Some creditors "will choose to have their money faster" while others would opt for no haircut but repayment over a longer period, Musokotwane added. "In dealing with the debt problem, the principle of "common action and fair burden" should be followed," China's foreign ministry said, in its statement responding to criticism that it delayed the restructuring.

There is uncertainty however over whether China would adopt a multilateral approach for other indebted countries, such as crisis-hit Sri Lanka, which defaulted on external debt that reached $47 billion at the end of last year.

Tokyo said in late August it would coordinate with other creditor nations, including India and China - Sri Lanka's largest bilateral creditor - and urged joint restructuring talks.

Between 2000 and 2020, Chinese lenders, mostly state-owned banks, agreed to lend $160 billion to African countries, according to Boston University. China wrote off at least $3.4 billion of debt between 2000 and 2019, almost all interest-free loans to African countries, while independently, state-owned lenders restructured or refinanced $15 billion, according to Johns Hopkins University's China Africa Research Initiative (CARI).

Chinese state-owned banks were "laser-focused" on getting repaid, said AidData's Brad Parks, noting that Congo Republic renegotiated $1.3 billion of loans from China Eximbank in 2019 by lengthening maturities and increasing interest rates. The debt rose to $1.6 billion.

Beijing's ambassador to Zambia said in his August speech, "we didn't want to go into the G20 creditors committee, the Common Framework," adding friendly bilateral cooperation was "the best way to deal with debt between two friends."

Du added, however, that an "important" May 31 call between Zambia's and China's presidents convinced Beijing to join multilateral talks.

"China is having a real, healthy set of deliberations on how to deal with their first ever mammoth debt crisis and they should be applauded for their deliberations," said Kevin Gallagher, professor of global development policy at Boston University.

"But if they don't act quick, it'll only get worse."