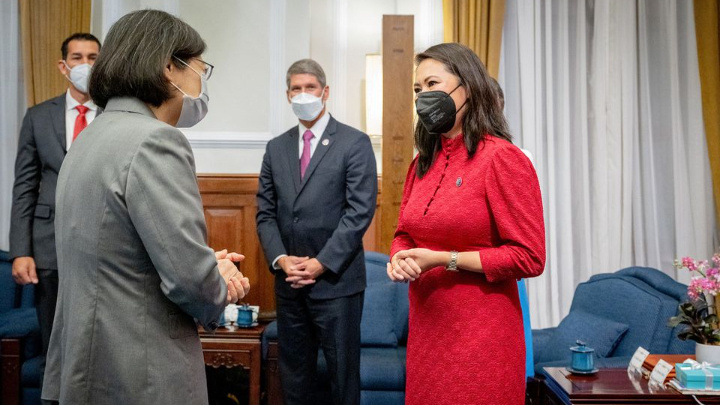 Taiwan is confident it can sign a "high standard" trade deal with the United States under a new framework, President Tsai Ing-wen told a visiting group of U.S. lawmakers on Thursday.

Washington and Taipei unveiled the U.S.-Taiwan Initiative on 21st Century Trade in June, days after the Biden administration excluded the Chinese-claimed island from its Asia-focused economic plan designed to counter China's growing influence.

Tsai told the bipartisan U.S. lawmaker delegation at a meeting in the presidential office that Taiwan would work with the United States to forge even closer trade and economic ties.

"We have already announced that negotiations under the U.S.-Taiwan Initiative on 21st Century Trade will begin soon. We are confident that through this initiative, we can sign a high-standard trade agreement and advance bilateral trade development," she said.

Taiwan has long pushed for a broad free trade deal with the United States, its most important international backer and foreign arms supplier even in the absence of formal diplomatic ties.

Stephanie Murphy, a Democrat from Florida who sits on the House Armed Services Committee, told Tsai she supported such an agreement.

"One of the most important things Congress can do right now is to deepen the economic relationship with Taiwan, and in particular, by pushing for a high-quality free trade agreement between the U.S. and Taiwan," she said.

The group is the latest in a string of senior officials from the United States to visit Taiwan since U.S. House Speaker Nancy Pelosi came early last month. Her visit infuriated Beijing, which responded by launching war games near the island.

Tsai thanked the delegation for conveying strong congressional support for Taiwan just as China has been carrying out its drills, which have scaled back but continued.

"Taiwan will not back down," Tsai said. "We will actively deepen our cooperation with democratic partners to jointly safeguard peace and stability in the region."