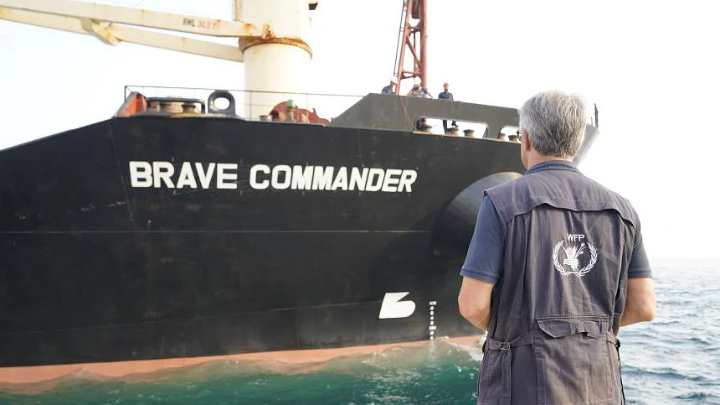 A World Food Programme representative looks on as a ship carrying wheat grain from Ukraine to the Horn of Africa docks in Djibouti, on Aug 30, 2022. PHOTO: REUTERS

"In total, two-thirds of the ships sent are directed to Asia, Africa, and the Middle East," Ukraine's Foreign Minister Dmytro Kuleba said in a statement.

He said that recovery of Ukrainian food exports through the "grain corridor" had a positive effect on the reduction of prices as in August, after first shipments completed, wheat prices fell by at least 5 per cent.

"The Russians' fakes about sending Ukrainian grain only to Europe simply do not correspond to reality," Kuleba said.

Earlier on Wednesday, Putin said that "almost all the grain exported from Ukraine is sent not to the poorest developing countries, but to EU countries".

He accused European countries of acting as "colonialists" and said they "once again simply deceived developing countries".

But data compiled by a joint centre in Istanbul monitoring the July agreement showed slightly more than a third of the grain delivered to European countries and another 20 per cent arriving in Turkey.

It also showed 30 per cent reaching "low and lower-middle income countries" across the world.

More shipments are expected to start arriving in famine-stricken parts of Africa and the Middle East under the UN World Food Programme whose implementation is just getting under way.