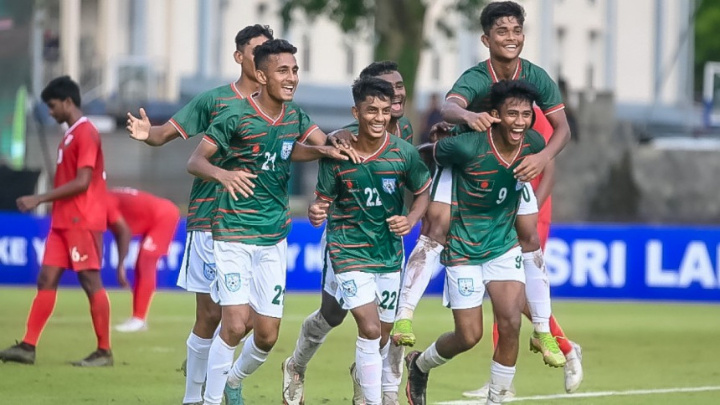 Forward Mirajul Islam slotted home a hattrick as Bangladesh stormed into the semifinals of the SAFF U-17 Championship with a massive 5-0 win over the Maldives in their second and final group match at the Racecourse International Stadium in Colombo yesterday.

A second win saw Bangladesh emerge as Group A champions, setting up a September 12 semifinal clash against whichever team eventually finishes as runners-up in Group B.

Fresh off an emphatic 5-1 win over hosts Sri Lanka, Bangladesh were tipped as favourites against the Maldives, a team they had beaten 0-9 in the lone meeting between two sides in Nepal during the 2018 edition of the tournament.

Although Bangladesh took the lead in the first five minutes, BFF technical director Paul Smalley, who is coaching the side, will be disappointed that a team groomed in the BFF Academy for a year misplaced a lot of passes and lost the ball often in the first half.

However, things changed in the second-half, when Mirajul came to the fore with his hattrick.

In the first half, Mirajul set up Nazmul Huda Faisal with a cutback from inside the box and the latter made no mistake as Bangladesh took a fourth-minute lead. And although their performance since was sloppy, Murshed Ali ran down the left and drove in at the near post in the 38th minute to double the margin.

After resumption, Bangladesh dominated, with play mostly confined to the Maldivian half before Mirajul took over.

He first received the ball on the edge of the six-yard box and took one touch to set himself up before opening up his body and curling into the far post, giving the keeper no chance. Three minutes later, he cut into a similar position from the left and unleashed a powerful, low shot to the far post. This time, the keeper got a glove on it, but it was not enough to stop the ball going in.

He then completed the rout with another clinical strike from inside the box after a short corner routine saw the ball bounce back to him just outside the six-yard line.