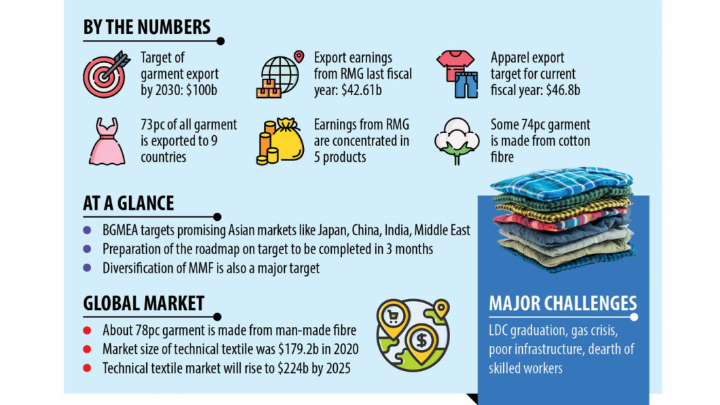 Bangladesh's garment manufacturers are pinning their hopes on the burgeoning Asian markets and the growing use of non-cotton apparel items to elevate their export earnings to $100 billion by 2030.

"I hope we can complete the preparation of the roadmap within three months," said Faruque Hassan, president of the BGMEA. He declined to disclose the names of the international lender and the firm.

The BGMEA's roadmap is aimed at diversifying markets and products and spreading risks, if any.

Due to a lack of market diversification, 73 per cent of Bangladesh's garment exports are limited to nine countries -- the US, Germany, the UK, Spain, France, Italy, the Netherlands, Canada, and Belgium.

Under the initial assessment, the BGMEA and the two partners are looking at the Asian markets as a major destination alongside the existing top three destinations, namely the European Union, the US, and Canada.

Asia's apparel market is projected to be $613.70 billion in 2022, with the market expected to grow annually by 5.35 per cent from 2022 to 2026, according to German market and consumer data provider Statista.

Among the Asian countries, garment shipment from Bangladesh to Japan has already moved past the $1-billion mark. It rose 16.27 per cent to $1.09 billion in the last fiscal year.

Despite the ongoing war and supply disruptions, the exports to Russia rose to $583.78 million in FY22 from $593.66 million in the previous year.

In total, receipts from garment shipment in the non-traditional markets were estimated at $6.37 billion, an increase of more than 25 per cent to $5.08 billion in FY21.

Among the Middle Eastern countries, Saudi Arabia, the UAE, Qatar, Bahrain, Kuwait and Oman are promising markets for Bangladesh, according to Hassan.

Under the roadmap, local suppliers will focus on the diversification of goods within the apparel industry since 80 per cent of external earnings for the sector come from only five items: trousers, woven shirts, T-shirts, pullovers, and undergarments.

Besides, more diversified garment items are expected to be made from man-made fibres (MMFs) such as viscose, tencel, staple and plastic as they fetch higher prices than cotton-made items.

For instance, if the price of a cotton-made T-shirt is $5, the same apparel item produced from MMF would bring $10.

Currently, of the total garment items shipped from Bangladesh, 74 per cent are made cotton fibre whereas 78 per cent of apparel products sold globally are manufactured using non-cotton items. As a result, Bangladesh is being deprived of better prices.

The roadmap will also put an emphasis on the $224.4 billion global technical textile market, which includes products like personal protection equipment, hospital bed sheets, uniforms of nurses, and isolation sheets.

Hassan has termed the erosion of the LDC-linked duty preference in the EU, the largest trade bloc for Bangladesh, following the nation's graduation from the group of the least-developed countries in 2026 as one of the major challenges that could stand in the way of the $100 billion export target.

"We know we will lose our duty privilege in our main export destinations. We are making preparations so that we are not affected too much because of the graduation," he said.

The UK and Australia have confirmed that they will retain the LDC duty privilege even after graduation. The EU has said it would keep offering the trade privilege until 2029.

Inadequate gas supply, the price fall of garment items globally, a lack of skilled workforce, an inefficient port operation, and poor road and highways connectivity are other major challenges cited by Hassan.

For instance, the price of apparel products shipped from Bangladesh to the EU declined by 3.64 per cent, and by 7.04 per cent in the US from 2014 to 2018, a BGMEA study said. During the period, the cost of production went up by 30 per cent.

He thinks the current slowdown in garment shipment stemming from the impacts of the Russia-Ukraine war and higher inflationary pressures in the continent are temporary.

"The brightened image of the sector will also help bring orders from international retailers and brands," he said, adding that the $20-billion domestic primary textile sector is capable of supplying raw materials to the garment industry.

Because of the lingering trade tension between Washington and Beijing, a lot of US-bound orders are shifting to Bangladesh from China.