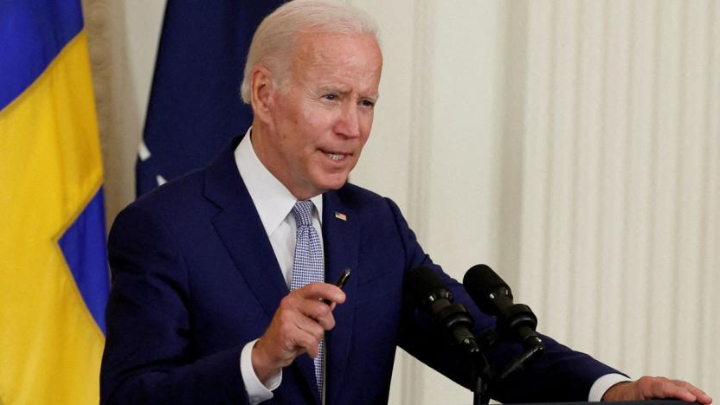 FILE PHOTO: US President Joe Biden in the East Room of the White House, in Washington, US, August 9, 2022. REUTERS/Evelyn Hockstein/File Photo/File Photo

US President Joe Biden's administration on Tuesday said it would be counterproductive to brand Russia a "state sponsor of terrorism," rejecting calls from Ukraine and lawmakers to take the far-reaching action.

Biden, asked by a reporter on Monday if he would blacklist Russia as a terrorist state, said simply, "no," after months of non-committal answers from senior officials.

Asked Tuesday whether a decision had been made, White House Press Secretary Karine Jean-Pierre said a terrorism designation was "not the most effective or strongest path forward" to "hold Russia accountable."

She said the designation would hamper aid delivery to parts of war-ravaged Ukraine or prevent aid groups and companies from participating in a deal brokered by the United Nations and Türkiye to ship badly needed grain from Ukraine's blockaded ports.

"It would also undercut our unprecedented multilateral (coalition) that has been so effective to holding Putin accountable and could also undermine our ability to support Ukraine" in negotiations, she told reporters, according to AFP.

A label of "state sponsor of terrorism" by the United States, the world's largest economy, has wide-ranging ramifications, with many businesses and banks unwilling to incur the risk of legal action by US prosecutors.

Ukrainian President Volodymyr Zelensky has called on the West to label Russia formally as a terrorist state following a series of attacks that killed civilians, notably a strike on a shopping mall in Kremenchuk in June in which at least 18 people died.

Foreign Minister Dmytro Kuleba, asked about Biden's decision, said the lack of a designation now "does not mean that it can never be made."

"We are grateful to the US for everything they continue to do for Ukraine, but on this particular issue, we will not back down and will continue to insist on our position, as it will be the right decision indeed," he said.