In Benzema's absence, Vincius Junior stepped up to open the floodgates with a classy finish 11 minutes into the second half. 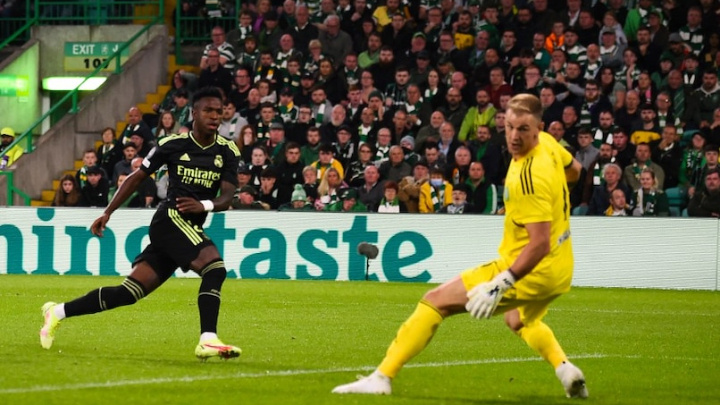 Carlo Ancelotti praised Real Madrid's resilience to deliver a second-half "masterclass" in winning 3-0 at Celtic to start their Champions League defense after a difficult first 45 minutes in which they lost Karim Benzema to injury. The Frenchman limped off with a knee problem after Celtic captain Callum McGregor had struck the post with the best effort of the first period. In Benzema's absence, Vincius Junior stepped up to open the floodgates with a classy finish 11 minutes into the second half.

"Here you suffer," said Ancelotti, who had not won in his three previous visits to Celtic Park as AC Milan manager. "Against this team, in this atmosphere, especially in the first half we suffered.

"In the second half we played very, very well. I am very satisfied. Games don't always go as you want, but this team knows how to suffer in the bad moments. The second half was a masterclass."

Celtic had begun the night with a perfect record this season, including a 4-0 demolition of local rivals and Europa League finalists Rangers on Saturday.

But in their first Champions League group match for five years, Ange Postecoglou's men were given a harsh lesson of the need to take their chances in the step up to the highest level in European football.

"Up until the 60 minute mark we were well in the game but you get punished at this level if you don't take their chances," said Postecoglou.

"We had the chances. What we learned today, we already knew that we have to be clinical in both boxes."

The return of the Champions League anthem was met by a guttural roar of 60,000 packed into Parkhead and the home fans nearly had a goal to celebrate inside the first minute when Liel Abada's strike was deflected just wide.

Postecoglou promised to stay true to his attacking philosophy against the European champions and the Australian stayed true to his word.

Abada should have done better when he shot tamely into the arms of Thibaut Courtois and McGregor's fierce effort came crashing back off the post as the hosts had the better of the opening 20 minutes.

- Benzema injury 'is not serious -
Ancelotti started with 10 of the 11 that began last season's Champions League final success over Liverpool, with 80-million-euro ($84 million) signing Aurelien Tchouameni replacing the departed Casemiro.

But Los Blancos were forced into a change after half an hour when Benzema hobbled off with a knee injury to be replaced by Hazard.

"It seems nothing worrying but we have to wait for the test tomorrow," added Ancelotti on Benzema's injury. "On the first evaluation, it doesn't seem anything serious."

Only a fine save from Joe Hart prevented Vinicius from opening the scoring before the break after the Brazilian broke the offside trap to gallop clear in behind the Celtic defense.

Postecoglou wheeled away in frustration with the sense his side could ill afford to waste such opportunities and so it proved.

Vinicius was deadly when given a second chance up against Hart as he steered Federico Valverde's cross into the bottom corner.

Celtic were barely able to catch their breath before conceding again as Modric wriggled free inside the area and had just too much on his finish to beat Hart's right hand.

Hazard then grabbed his first goal since January to round off a 33-pass move as the Belgian tapped home Dani Carvajal's pinpoint cross.