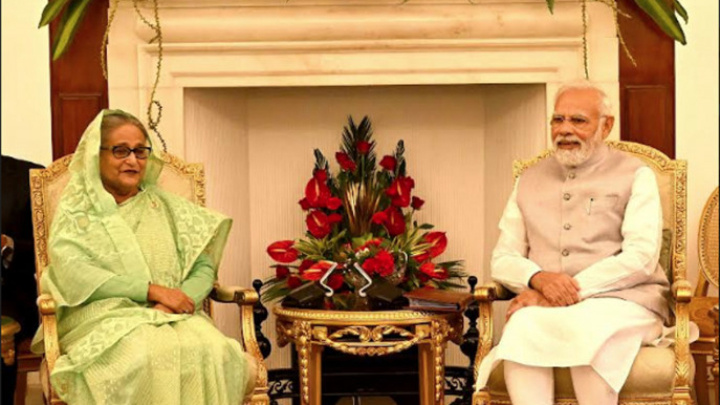 India is willing to export fuel oil to Bangladesh and start negotiations on a comprehensive economic partnership agreement (CEPA) as the two neighbors signed seven memorandums of understanding (MoUs) including water-sharing of the cross-border Kushiyara River.

The documents of the MoUs, ranging from scientific research to training of railway personnel, were exchanged at a joint meeting of Prime Minister Sheikh Hasina and her Indian counterpart Narendra Modi in New Delhi on Tuesday.

Stating that India-Bangladesh friendship will touch new heights in the next 25 years, Modi said at a joint press conference after the summit, "It is imperative that we together face the forces that are adversarial to us."

In her speech, Sheikh Hasina said the Bangladesh-India partnership will bring benefits not only to the countries, but it would also bring peace and prosperity to the region as a whole.

Meanwhile, State Minister for Foreign Affairs Shahriar Alam told the media that India is willing to provide Bangladesh with fuel oil, while Dhaka will also seek gas from the next-door neighbour.

The ministry concerned will discuss the issues with the Indian sides, the state minister told the media.

India has also expressed its interest in investing more in the energy and power sector of Bangladesh, noted Shahriar Alam, who is in the entourage of PM Sheikh Hasina.

India is procuring a huge quantity of Russian crude oil at 35% lower than regular prices and exporting it to different countries, including the United States, after refining. But  Bangladesh is yet to capitalise on sourcing such low-priced Russian fuel owing to payment-related complexities.

As of July, India and China have bought oil, gas and coal worth $24 billion from Russia in only three months after its invasion of Ukraine. Out of this, India spent $5.1 billion on Russian oil, gas and coal, more than five times the value of a year ago, according to a Bloomberg report.

In the meantime, Indian tycoon Gautam Adani plans to start exporting electricity from a coal-fired plant in eastern India to Bangladesh in December, with a view to helping the South Asian nation alleviate energy shortages.

Adani Power Ltd will commission a 1.6-gigawatt facility in Jharkhand state and a dedicated transmission line for the exports by 16 December, Adani said in a Twitter post late on Monday after meeting Sheikh Hasina in New Delhi.

The MoU on Kushiyara is the first such pact in 26 years since the Ganges water treaty was signed in 1996. Bangladesh, which shares 54 rivers with India, has got its top priority issue – Teesta water sharing – unresolved for nearly a decade for, as cited by India, strong opposition from its West Bengal state's Chief Minister Mamata Banerjee.

However, Prime Minister Hasina hoped that the Teesta issue would be solved soon.

"Today, I thank PM Modi that we resolved the issue of Kushiyara. The Teesta water-sharing treaty would be concluded at an early date," she said, adding that the two countries resolved many outstanding issues in the spirit of friendship and cooperation.

Modi said the agreement on sharing water of the River Kushiyara will benefit Southern Assam in India and Sylhet region in Bangladesh.

"Both leaders have directed the ministries concerned to commence negotiations on CEPA this year in 2022 and complete it for Bangladesh's final graduation from the LDC status," Indian foreign secretary Vinay Mohan Kwtra said at a special briefing on Tuesday.

In a joint press briefing after a discussion with Sheikh Hasina, Modi also noted, "Our bilateral trade is expanding fast. Today, India is the largest market in Asia for Bangladeshi exports. To push this growth even further, we will soon begin talks on the CEPA."

Once the CEPA, a free trade agreement, is signed, both Dhaka and Delhi will see their exports shoot up by 190% and 188% respectively and their GDP expand by 1.72% and 0.03%, according to a Dhaka-Delhi joint feasibility study.

After the talks at Hyderabad House in Delhi, both the countries signed an agreement on withdrawing water from the Kushiyara River in Assam and six other memoranda of understanding as Prime Minister Sheikh Hasina and her Indian counterpart spoke of "shared cultural traditions" and solving issues through "clear discussions".

The deal allows Bangladesh to withdraw 153 cusecs of water from the River Kushiyara at Rahimpur.

"We have signed an important agreement on sharing water of the Kushiyara river. This will benefit Southern Assam in India and Sylhet region in Bangladesh," Modi said.

Speaking on the water sharing issue, he said there are 54 rivers that pass through the Indo-Bangladesh border and have been linked to the livelihood of the people of the two countries for centuries. "These rivers, folk tales about them, folk songs, have also been witness to our shared cultural heritage," he noted.

Prime Minister Sheikh Hasina expressed her hope that the Teesta water-sharing treaty and other issues will be resolved soon.

"Today, I thank PM Modi that we resolved the issue of Kushiyara…So, I know as long as Prime Minister Modi is here, Bangladesh and India will resolve all these problems," said Sheikh Hasina with Modi by her side.

In the meantime, the two premiers virtually opened Unit-1 of the Maitree Super Thermal Power Project in Bagerhat's Rampal.

The first unit of the Maitree Super Thermal Power Plant will go into commercial operation in early October, in a major stride in growing Bangladesh-India power sector cooperation, an official told UNB.

Rising energy prices are presently posing a challenge to all developing countries. The unveiling of the first unit of Maitree Thermal Power Plant will increase the availability of affordable electricity in Bangladesh, Modi said.

Fruitful talks are also underway between the two countries on connecting power transmission lines, the Indian PM pointed out.

Another MoU signed to further boost bilateral ties is on scientific cooperation between the Council of Scientific and Industrial Research, India and the Bangladesh Council of Scientific and Industrial Research. The third one was signed between the National Judicial Academy, Bhopal, India and the Supreme Court of Bangladesh, which promises training programmes for Bangladeshi judicial officers in India.

The fourth and fifth are for training Bangladeshi personnel in Indian Railways institutes and collaboration in Information Technology systems for freight operations.

Another MoU was between Prasar Bharti and Bangladesh Television, the two state-run broadcasters of the neighbouring countries, while the seventh was for cooperation on space technology.

Meanwhile, later on, the day, President of India Droupadi Murmu in a meeting with Sheikh Hasina assured that her country will continue to be a reliable partner in the developmental journey of Bangladesh, noting that Bangladesh has achieved great success in the socio-economic prosperity of its people.

"Our relations have always been guided by the spirit of cooperation and mutual trust," President Murmu said when Prime Minister Sheikh Hasina met her at Rashtrapati Bhavan in the Indian capital on Tuesday.

PM Modi welcomed his Bangladeshi counterpart with a handshake. Rashtrapati Bhavan was decked up for welcoming Sheikh Hasina.

After that, the two went to Hyderabad House for a sit-down discussion.

Sheikh Hasina is on a four-day official visit to India for the first time in three years. The last time she travelled to India was in 2019 before the Covid-19 pandemic.