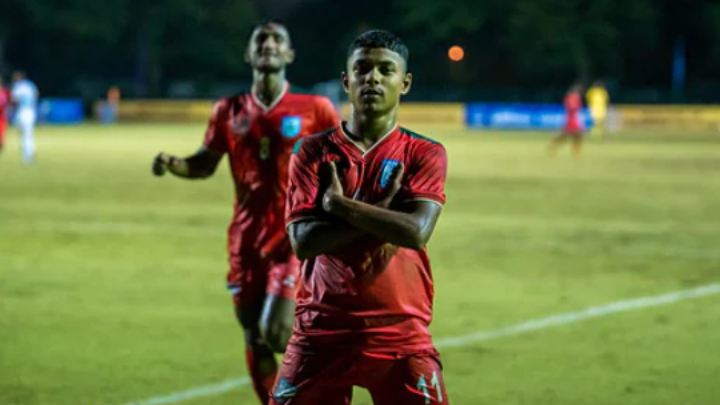 Bangladesh U-17 football team got off to a flying start as they thrashed hosts Sri Lanka 5-1 in their opening Group A match of the Saff U-17 Championship at Racecourse International Stadium in Colombo Monday.

After resumption, Murshed further widened the margin with his second in the 75th minute before Yaseer Sharfraz made it 3-1 two minutes later.

Sirajul Islam Rana bagged the fourth for Bangladesh in the 79th minute while Nazim Uddin completed the rout in the 90th minute.

The boys in red and green completely dominated entire proceedings while the Islanders were totally off-color.

Earlier, in the day's opening Group B match, India made a good start as they blanked Bhutan 3-0 at the same venue.

Bangladesh, pitted in Group A along with Sri Lanka and Maldives, will play will their second and last group stage match against the Maldives Wednesday.

The top two teams from each group will play the semi-finals next Monday while the final of the tournament is slated for September 14.

All the matches will be held at Racecourse International Stadium.