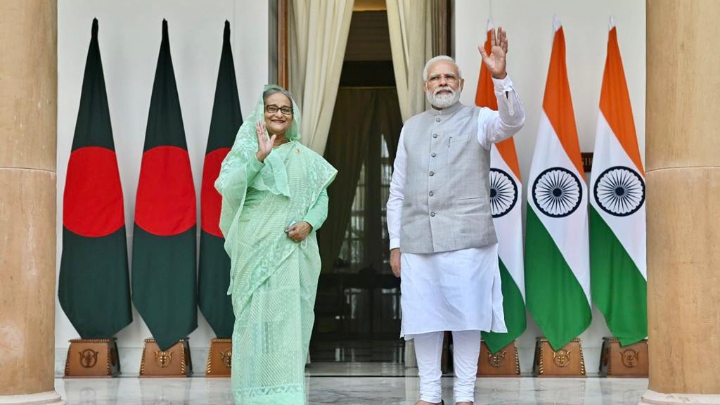 Prime Minister Sheikh Hasina said she and her host Indian premier Narendra Modi on Tuesday reaffirmed their resolve to sign an agreement on sharing the water of the Teesta River that runs through the two neighboring countries.

“We expressed hope that all outstanding issues will be resolved, including the signing of the Teesta water sharing treaty at an early date," Hasina said in a press statement after talks with Modi at historic Hyderabad House in upscale New Delhi.

She said they both agreed to pursue collaborative efforts to sustain their economic growth and maintain peace, security and stability in the two countries and in the region.

PM Hasina also mentioned that it will not only bring benefits to the two countries but also bring peace and prosperity to the region as a whole if Bangladesh and India can work together as partners.

She said that bounded by 54 common rivers and a 4,000 kilometers border, Bangladesh and India are committed to enhancing the collective welfare of the two peoples.

Hasina said Bangladesh-India bilateral relation is known to be a role model for neighborhood diplomacy.

“Over the last decade, both the countries have achieved remarkable progress in a number of areas,” she said.

The prime minister said that the two countries had resolved many of the outstanding issues in the spirit of friendship and cooperation.

Having forged a strong partnership over the last 50 years, she said, both countries are working on an increasingly wide range of issues of mutual interest.

She congratulated India on the successful completion of the “Azadi Ka Amrit Mahotsav” – the year-long celebrations marking the 75th year of India’s Independence.

The prime minister termed the bilateral meeting as another round of fruitful discussion and hoped that the outcome of this meeting will bring benefits to the people of both countries.

“We held the meeting in a spirit of close friendship and cooperation. We discussed a wide range of bilateral issues to take forward our relationship in the days ahead,” she added.

She mentioned that both of them focused on possible ways to materialize our commitments and accommodate each other’s priorities in a mutually beneficial manner.

Connectivity, trade and commerce, investment, water resources management, security, border management and lines of credit are some of the areas they discussed, Hasina said.

She expressed her gratefulness for the invaluable support extended by the Government and the people of India in the great War of Liberation of Bangladesh in 1971.

“Since then, Bangladesh-India ties are anchored in shared history and culture, mutual trust and respect, longstanding friendship and continued cooperation,” she said.

She reiterated that India is the most important and closest neighbour of Bangladesh.