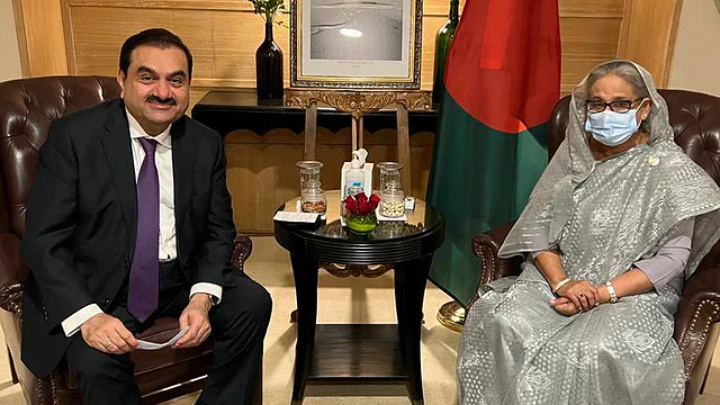 Bangladesh prime minister Sheikh Hasina, who is on a four-day visit to India, met with the chairman of Adani Group, Gautam Adani on Monday.

Indian billionaire industrialist Adani praised prime minister Hasina for her boldness and expressed confidence in the completion of the transmission line under the Godda Power Project to Bangladesh by December this year.

In a tweet, Adani wrote, “It is an honour to have met Hon PM of Bangladesh Sheikh Hasina in Delhi. Her vision for Bangladesh is inspirational and stunningly bold. We are committed to commissioning our 1600 MW Godda Power Project and dedicated transmission line to Bangladesh by Bijoy Dibosh, 16 Dec 2022.”

Adani Power has set up a 1,600 MW thermal power in Jharkhand’s Godda to supply power generated to Bangladesh Power Development Board (BPDB) through a dedicated transmission line.

Bangladesh is an important partner under India’s ‘Neighbourhood First’ policy. The cooperation extends to all fields including security, trade & commerce, power & energy, transport & connectivity, science & technology, defence, rivers, and maritime affairs among others.

PM Hasina was welcomed by Darshana Jardosh, minister of state for textiles and railways in New Delhi upon her arrival here on Monday. Shiekh Hasina’s visit is seen as a crucial one which will further strengthen the multifaceted relationship between India and Bangladesh.

The Bangladesh prime minister also got clicked with the dancers who welcomed her. Issues which are on top of the agenda are upgrading defence cooperation, expanding regional connectivity initiatives and establishing stability in South Asia.

This visit is her first visit after both nations’ bilateral relations touched their 50th year in 2021. Last year also marked the 50th anniversary of Bangladesh’s independence and the 100th birth anniversary of Sheikh Mujibur Rahman, the founding father of the nation.

PM Modi visited Bangladesh in 2021. Maitri Diwas celebrations were held in 20 capitals around the world including Delhi and Dhaka. Prime ministers of both countries have met 12 times since 2015.

India and Bangladesh have sought to create a model for regional cooperation besides reviving several connectivity initiatives over the last few years. The Akhaura-Agartala rail link will reopen soon, and it is anticipated that Agartala and Chittagong will be connected by air in a few weeks.

Just a week ago Gautam Adani has been ranked as third richest person of the globe overtaking Bernard Arnault and becoming the first Asian person to take that spot, according to Bloomberg and its Billionaires Index.