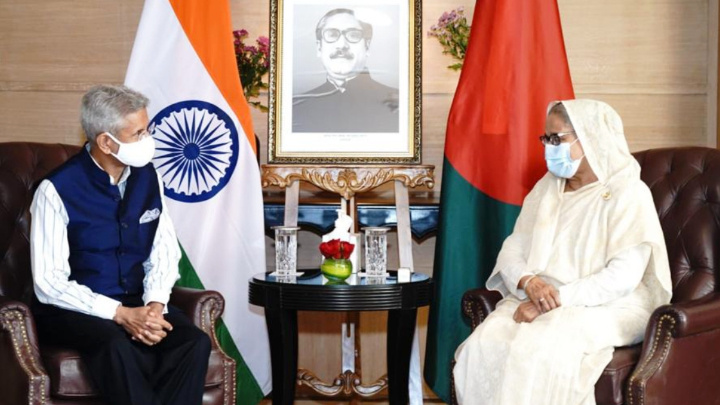 India is keeping an eye on the recent unrest in the Rakhine state of Myanmar that Bangladesh apprehends it might hamper the process of Rohingya repatriation.

Indian External Affairs Minister S. Jaishankar made the remarks when he paid a courtesy call on Prime Minister Sheikh Hasina at the meeting room of her palace residence in New Delhi, BSS reports.

"They told us that India is keeping an eye on the unrest being created there (Rakhine state)," Senior Foreign Secretary Masud Bin Momen told a news briefing after the meeting quoting the Indian minister,

"Everyone has that apprehension," he said, quoting the premier.

During the meeting, the Foreign Secretary said that both Bangladesh and India placed their proposals to enhance the connectivity between the neighbouring countries.

The Prime Minister said that priority should be given to the projects that would ensure progress and prosperity for the people of Bangladesh, India, Bhutan and Nepal.

To this end, he said the BBIN like initiative should be sped up for better connectivity in the region, the foreign secretary said.

He said initiative should be taken to use Bangladeshi ports by Nepal and Bhutan.

Mentioning that there was significant decline in the people to people connectivity during the COVID-19 pandemic period, he said after the Covid-19 situation the connectivity of road, air and rail has been restored.

On grid connectivity, the Foreign Secretary said that the grid connectivity would facilitate Bangladesh to bring electricity from Nepal and Bhutan and India to disseminate power from one part to another.

In this connection, he said 1000MW of electricity has already been procured in Bangladesh through the connectivity.

Water sharing issues also came up in the discussion, he said, adding that the main discussion to this end will be held tomorrow.

During the meeting,  they also discussed the Russia-Ukraine war that created a crisis in the globe, he said.

Both the leaders discussed enhancement of collaboration to face the crisis collectively, he added.

About energy cooperation against the backdrop of the war, he said Bangladesh can procure fuel oil from India if it has surplus energy through mutually agreed terms and conditions.

The Foreign Minister said they are giving the final touch of the MoUs on sharing of the water of Kushira river, water management, information and broadcasting, railways and BSRI which are expected to be signed.

Responding to a question, he said sharing of the Teesta and Ganges rivers might come with many more issues. The tenure of the Ganges water treaty would soon be completed, he added.