Climate change and habitat encroachment are making black bears more brazen around humans. This extract from Fuzz: When nature breaks the law by Mary Roach looks at how they’re tackling the problem in the Colorado mountains 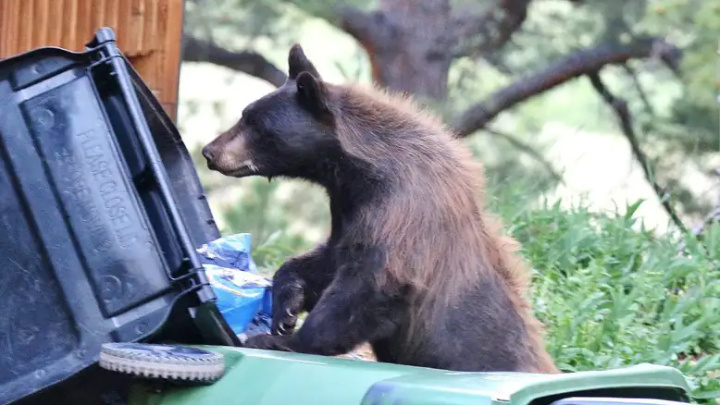 It is 3.30am, bear time in the back alleys of compact, restaurant-dense downtown Aspen, Colorado. I hurry to catch up with Stewart Breck and spot what just made him shout and throw up his hands in exasperation: two fat trash bags ripped open, with food scraps spilling out onto the pavement.

The sound of Breck’s approaching SUV must have scared off a bear mid-scavenge. Compost and garbage are known in the parlance of human-bear conflict as “attractants.” Aspen municipal code requires both to be secured in bear-resistant containers.

“Give me a break,” Breck says, quieter now, hands back at his sides. “We spent hundreds of thousands of dollars on this.” This equals: multiyear, multicity research into how best to get people in the midst of bear country to properly lock up attractants, and how much difference it makes when they do.

Between January and June of this year, there were more than 700 such encounters with black bears in Colorado – not hugely out of the norm in recent years. What is out of the norm, though, is the nature of these run-ins. “It just seems they are a little more brazen this year,” Christy Bubenheim from the state’s parks and wildlife service recently told The Denver Post. When bears get too bold, it often doesn’t end well, mainly for them: between 2015 and 2021, in Colorado alone, 775 black bears were euthanized.