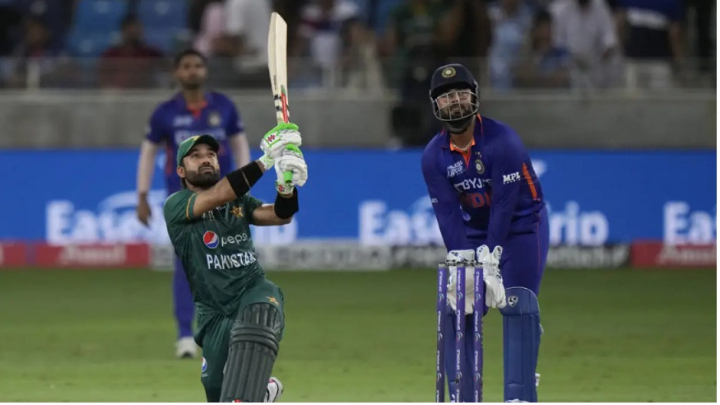 DUBAI: Ironically, unpredictability has been Pakistan’s greatest virtues in big matches and big tournaments. On Sunday, they got another unexpected player Mohammad Nawaz to spring a surprise and stun India in the second thriller on the bounce between the two teams in this Asia Cup. Pakistan winning by five wickets with a ball to spare has left India vulnerable in the Super 4s.

Chasing 182, the left-arm spinner came out to bat at No. 4, after returning figures of 1/25 with his left-arm spin, in the ninth over with the scoreboard reading 63/2. With Mohammad Rizwan batting like a rock at the other end, Nawaz launched a brutal counter-attack on the Indian bowlers to score a 20-ball 42, hitting six boundaries and two sixes in front of the wicket, and put India on the backfoot. He nullified India’s middle-over trump card Yuzvendra Chahal, milking him for 1/43 in his four overs.

Even as Rizwan fell for a 51-ball 71 moments to Pandya’s slower ball at long-off after Nawaz went the same way off Bhuvneshwar Kumar, the Indian team cracked under pressure. Arshdeep Singh dropped a sitter offered by Asif Ali at short-third in the 18th over.

Needing 26 off 12, Khushdil Shah and Asif got stuck into India’s most experienced seamer Bhuvneshwar, whose death-bowling abilities got exposed, to pick up 19 runs off the 19th over. Arshdeep’s effort to make amends for the dropped catch was always going to be tough with just seven in the bank.

Nawaz’s sterling show put Virat Kohli’s return to form in the shadow. Kohli turned back the clock with 60 off 44. The magical form which kept distancing itself from him in empty stadiums during the pandemic here in UAE in 2020, came back in front of a packed Dubai International Cricket Stadium against fiercest of rivals.

Kohli’s innings may not come across as the most astounding of T20 innings in terms of statistics, but its significance in the larger context is much greater than helping India post a challenging 181/7. Perhaps he was crippled by the lack of support from the middle-order which undid all the good work done by the top-three batters Rohit Sharma, Rahul and Kohli. As the power-packed middle-order of Suryakumar Yadav (13 off 10), Rishabh Pant (14 off 12), Hardik Pandya (0 off 2) and Deepak Hooda (16 off 14) fizzled out, Kohli couldn’t tee off. Hitting gaps and driving the fielding team crazy with his maverick-like running between wickets again became his go-to strategy. That he hit just four boundaries and one six said how well he maneuvered the field. It was ironic that his innings ended while he tried to pinch a second run and an Asif Ali direct hit found him marginally short of his crease.

Kohli took over once Rohit perished for 28 off 16 and Rahul holed out at long-on off Shadab Khan for 28 off 20. Kohli has never been the quintessential muscle player in T20s. His strengths, ironically, have never depended on funky ramps or switch-hits. Sunday was vintage Kohli.

Kohli got off the mark with a backfoot punch to mid-off off a Haris Rauf delivery bowled at 151 kmph and signaled he had rediscovered his imperious touch before the pandemic struck. And that nonchalant whip off a Mohammad Hasnain thunderbolt for a six over the mid-wicket fence screamed trademark Kohli.

Buoyed by a sterling show in the opening match, the raw pace attack of Pakistan turned out to amp up the heat with the ball. In turn, Rohit and Rahul feasted on the extra pace offered. The stand-out feature of the top-three’s batting on Sunday was the fact every aggressive shot was hit in front of square—be it Rohit’s short-arm pulls over the mid-wicket or Rahul’s crisp punches over the 30-yard circle. The brand of cricket promised over a year was finally on show with India’s captain and vice-captain opening the innings with 54-run stand in 5.1 overs.

You could see he was in the zone. Constantly talking to his partners in the middle-order, gesturing what the bowlers were trying and punching his bat every time his partner got the ball away to the boundary. And when he sprinted back to the danger end when Deepak Hooda was already saying to the second run, you knew Kohli meant business.