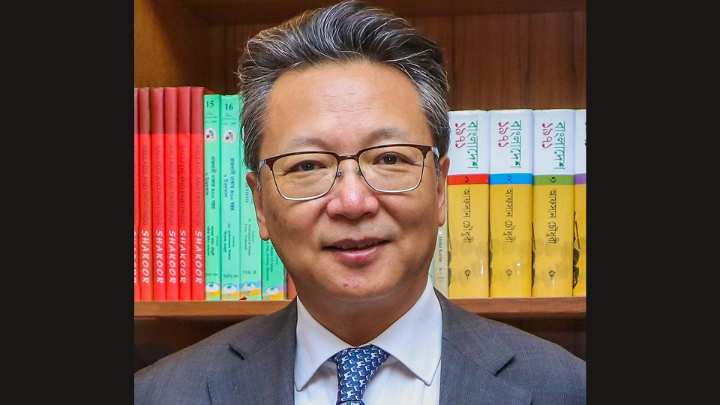 Ambassador of China Li Jiming on Sunday said Bangladesh has impressed the world with its fast and steady growth in the past decade, and is graduating from the least developed countries category under the phenomenal leadership of Prime Minister Sheikh Hasina.

“The world is witnessing Bangladesh rising from the subcontinent,” the Chinese envoy said at the opening ceremony of ‘Bangamata Begum Fazilatun Nesa Mujib eighth Bangladesh-China Friendship Bridge’ over Kacha River at Bekutia in Pirojpur.

Prime Minister Sheikh Hasina joined the opening of the 1493 metre bridge through a virtual platform from her office in the capital.

Ambassador Li Jiming in his speech on the occasion said China and Bangladesh have always been good neighbors and close friends.

When President Xi Jinping met with Prime Minister Sheikh Hasina during his visit to Bangladesh in 2016, the two leaders announced elevating our bilateral ties to a Strategic Partnership of Cooperation, which has ushered in a whole new chapter in our friendship history, he added.

“Looking ahead, we welcome Bangladesh to deepen cooperation with China under the Belt and Road Initiative, and to explore new opportunities under the Global Development Initiative. The Chinese dream of the great national rejuvenation and the “Sonar Bangla” dream are well connected. Let us join hands to realize our dreams together,” said the Chinese envoy.

He said China has kept building bridges in Bangladesh with aids from the Chinese Government since long before. The "Bangladesh-China Friendship Bridges" have become a household name in the country. The bridge inaugurated today is the 8th of its series.

The Bangladeshi side graces it by naming it after Bongomata, making it another monument of the two countries named after the great figures of Bangladesh, following the Bangabandhu Bangladesh-China Friendship Exhibition Center put into use last year. It manifests how the two peoples cherish the friendship.

Throughout the past four years, which tremendous commitment builders from China and Bangladesh have jointly constructed and witnessed the erection of the bridge.

In total, he said the Chinese contractors had trained more than 400 skilled workers of various functions. The bridge, like all its predecessors, connects not only the two banks of a river, but also the hearts of Bangladeshi and Chinese peoples.

Upon its opening, the bridge directly connects Khulna and Barisal, the two sides of the Katcha River, and opens up land transportation between the ports of Mongla and Payra under construction. It will give a strong boost to the development of southern Bangladesh.

The bridge stands as a perfect illustration of how the integration of Bangladesh’s Vision 2041 perspective plan and the Belt and Road Initiative would benefit the people of Bangladesh and the region beyond.

To continue such a precious tradition of friendship, with the request of Bangladesh government, China has determined to build the 9th Bangladesh-China Friendship Bridge. Experts from the two countries are already preparing for feasibility study on the project.