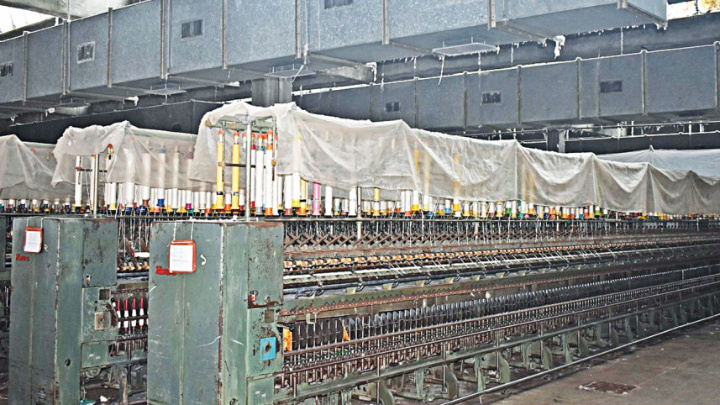 Machinery in the Darwani Textile Mills in Nilphamari continues to collect dust even though eight years have passed since the prime minister directed the authorities concerned to reopen 25 mills of the Bangladesh Textile Mills Corporation under a public-private partnership programme. PHOTO: EAM Asaduzzaman

The reopening of mills owned by the Bangladesh Textile Mills Corporation (BTMC) under a public-private partnership (PPP) programme is still shrouded in mystery as the private sector's response remains poor eight years after the prime minister issued a directive in this regard.

The PPP programme was jointly launched by the BTMC and Ministry of Textiles and Jute after Prime Minister Sheikh Hasina issued a directive on October 12, 2014, to reopen all 25 mills that were shut down in the face of huge losses.

The Cabinet Committee on Economic Affairs had initially approved the programme in principle in fiscal 2017-18 to run 16 of the 25 defunct mills under the PPP model, which has brought hopes of employment generation and increased economic activities across the country.

Sources say the 25 shuttered BTMC mills are collectively situated on 636.38 acres of high-value land with good communication networks that are suitable for developing industrial units.

Meanwhile, the private sector has enough skilled manpower for this purpose and so, the government wants to combine the two sectors to further the domestic textile industry.

Kazi Firoz Hossain, project director of the PPP programme, said private entrepreneurs spend fabulous sums of money to buy land and as a result, they sometimes find themselves short on funds when establishing the mill itself.

"So, the BTMC, as a major partner, wants to stand beside them by allocating the required land through the PPP model," he added.

Hossain, also in-charge of the BTMC's commerce sector, went on to say that private partners will implement the entire project, maintain the mills and market the textile products being produced.

The project has a tenure of 30 years but it could be extended further in the future.

Under the PPP agreement, private partners can produce denim, composite, knitwear, woven and other textile items on the land provided. However, there is no option to run activities beyond textile.

Kazi expressed optimism over the project, saying that if all goes well, each factory could generate 5,000 jobs and have a positive impact on the nation's gross domestic income.

Still though, confusion abounds over the success of the PPP programme as the response from private entrepreneurs is very poor even though eight year's have passed since the prime minister's directive.

Only one agreement was signed in first phase with Orion Group, a leading industrial conglomerate, taking charge of the Kaderia Textile Mills in Tongi while the agreement signing for Tanjin Fashion to take over Ahmed Bawani Textile Mills in Demra has been delayed.

Interested parties were asked to submit their proposal by March 7 earlier this year but the deadline was later extended until September 21 as no private partner showed interest.

Project Director Hossain said that many interested parties have been inquiring about the mills but none have purchased the scheduled documents.

Mohammad Ali Khokon, president of the Bangladesh Textile Mills Association (BTMA), had previously explained his take on the lack of interest among private entrepreneurs.

"The project for reopening closed textile mills is not a long-term solution as the government has imposed a complex structure and so, no renowned institution has come forward to invest," he said.

Most of the mills' infrastructures have been abandoned or become obsolete and so, they could be demolished first but this contract is also contingent on the government's long-term viability because if the government changes, the overall system may change, Khokon added.

The BTMA president did however say that if any well-known companies or groups want to sign on for the partnership, they could do so.

Razequzzaman Ratan, central committee president of the Samajtantrik Sramik Front, said that due to the government's policies, state-owned mills and factories have become dens of corruption and in line with the practice, some private entrepreneurs intend to grab them.

"The PPP system is an interim measure between public and private sectors with some resolutions to safeguard each other's interest but a section of greedy private entrepreneurs is unlikely to obey the minimum restrictions and are therefore unwilling to respond."

"We've given a specific proposal that by spending only Tk 1,200 crore, the outdated machineries of state-owned textile mills could be replaced for full swing production but the government did not accept our proposal and instead launched the PPP project, which has little possibility to succeed," he added.

Sources said there are also instances of mal practice by private entrepreneurs as according to BTMC statistics, the government has sold 12 mills through tender, handed over nine mills to their workers, 30 to their former owners and seven to the liquidation cell to sell them off on condition of resuming production and repaying any dues.

But not a single buyer did this as per the agreement and rather, some took loans against the mills' properties and sold machineries.

So, the ministry took back seven textile mills from private sector buyers for violating the terms and conditions of privatisation, they added.

Shahidullah Chowdhury, central committee president of the Trade Union Center, said that as the private sector has failed to run the government mills honestly, those should be modernised and go to production under strict monitoring by reducing top-heavy management.

Brigadier General Zakir Hossain NDC, PSC, chairman of the BTMC, said the PPP system is a new concept and apprehension among private entrepreneurs is not unusual.

"So, it will take some time to flourish and we are very much optimistic," he added.