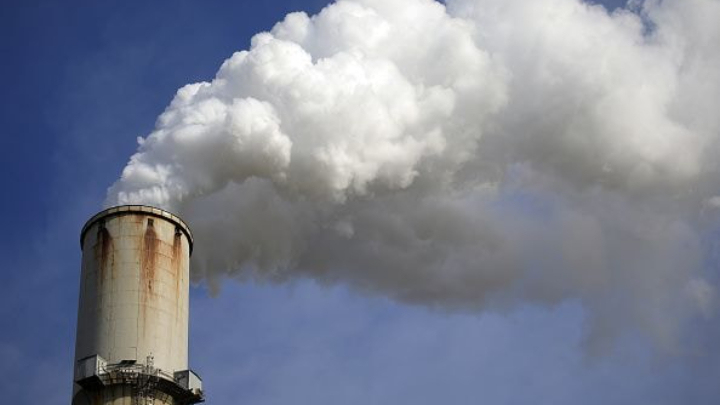 Emissions rise from power-generating station in Ghent, Ky., in April 2021

At the beginning of summer, it looked as though Congress would spend yet another session failing to act on climate change. Then Sen. Joe Manchin III (D-W.Va.) announced unexpectedly in late July that he would vote for a major climate bill, which Democrats promptly passed on a party-line vote. Suddenly, the United States has what many observers had all but assumed was unattainable: an ambitious, legislated strategy to cut U.S. greenhouse gas emissions, setting the country on course to reduce its carbon footprint by roughly 40 percent by 2030.

This is a signal moment in the struggle against this century’s greatest environmental threat. But the new law does not guarantee success. It has gaps. And achieving net-zero emissions by mid-century, as scientists recommend, will require a policy that has not yet been written and technological breakthroughs that have not yet been achieved.

The law rests on the notion that paying people and businesses to make cleaner choices — rather than penalizing them for continuing to pollute — will result in big emissions cuts. It offers tax credits to utilities that build or operate renewable electricity facilities, set to run until the electricity sector achieves substantial emissions cuts. It provides consumers with generous new incentives to buy electric vehicles and more efficient home appliances. And it pumps money into energy research and development, in the hopes that doing so will drive down the cost of clean technologies.

The Princeton University ZERO Lab, which models the effects of climate policies, reckons the law will reduce yearly emissions by roughly 1 billion metric tons by 2030. Before the law, the country’s emissions were set to decline by 27 percent from 2005 levels by the end of the decade. Now, Princeton’s experts predict a 42 percent cut — nearly reaching the Biden administration’s goal of halving emissions by 2030.

Emissions projections are looking better, but still behind

A difference of 15 percentage points might seem small relative to the volume of environmentalists’ loud cheering about the law. Yet it implies that the United States will slash emissions at roughly double the pace it did between 2005 and 2020, with some of the easiest shifts already made. Moreover, a future Republican president cannot easily rip up this new policy. Before now, climate wonks rested their hopes on President Biden taking executive actions that might not survive his administration. “The period of American exceptionalism on climate policy — that is, not having a climate policy — is over,” said the Michael Greenstone, a professor of economics at the University of Chicago.

If you build it …

The law foresees a vast buildout of industrial-scale solar, wind, and other facilities, along with miles of new heavy-duty transmission lines to zip electricity across the country and thousands of new electric-vehicle charging stations. Because the wind does not blow and the sun does not shine in all places at all times, and because wind and solar facilities occupy more land than fossil-fuel-fired power plants, Americans will see a lot of new energy infrastructure — and, in a country in which NIMBYism is practically the national pastime, renewables operators will have to fight bitter state and local opposition to build it. Another complication: Most of the nation’s deposits of lithium and other critical minerals lie near Native American reservations, raising questions about whether and how quickly they can be tapped.

Already, a bill that would ease the seemingly endless permitting delays that energy projects face — support for which was one of Mr. Manchin’s conditions for backing the new climate law — is facing progressive skepticism in Congress. Environmentalists have opposed efforts to deliver clean electricity to American homes because they would require new wires run through forests. Environmentalist opposition to emissions-free nuclear power has long been counterproductive in the climate effort. Without congressional action to ease construction — and the cooperation of state and local regulators — some of those calling loudest for addressing climate change could become enemies of that very effort.

Work with the market

Meanwhile, the Princeton researchers estimate that 29 percent of the law’s emissions cuts will come from the transportation sector. Yet the law’s consumer tax credits for electric vehicles come with substantial strings. To enjoy the full credit, vehicles’ batteries must be manufactured in North America, and the minerals that go into them mined here or in an allied country. These requirements are supposed to prevent China and other adversarial countries from cornering the market on components that will be critical to an electrified transportation system. But U.S. automakers warned that none of the electric vehicles currently on the U.S. market would qualify once these requirements kicked in. If supply chains do not adjust quickly, the new subsidies might not encourage much buying of electric cars.

Concerns about the effectiveness of the law’s push for EVs reflect broader questions about the all-carrots-no-sticks philosophy underlying it. The law lacks bite, neither placing an enforceable cap on national greenhouse emissions nor directly discouraging most fossil fuel use — by, for example, taxing carbon. So, emissions cuts are not guaranteed, the whole economy is not covered evenly, and legacy fossil fuel plants might continue operating for a long time. The Princeton analysis found that, particularly after 2025, the law would put the country on a far-improved emissions trajectory — but one that would still fall short of achieving net-zero emissions by 2050.

Environmentalists look to state and federal regulators to fill the law’s gaps, using powers the Clean Air Act gave them decades ago. On electric vehicles, state and federal regulators might set vehicle efficiency standards. California officials, for example, just banned the sale of new gas-powered cars after 2035. In other sectors, too, the Environmental Protection Agency retains substantial powers to force greenhouse gas cuts at fossil-fuel-fired power stations and other dirty sources, notwithstanding the Supreme Court’s recent ruling. Green-minded state officials can force more rapid change within their borders than the new law would accomplish on its own.

In other words, a huge amount of important climate policy has yet to be imposed. And, as ever, it is crucial that policymakers focus intently on getting the most emissions cuts from the money society spends on decarbonization. Instead of clunky mandates, they should marshal market forces in the fight.

Rather than dictating exactly what kinds of cars people may buy, a better approach would be to steadily raise gas taxes. This would encourage people to reduce unnecessary travel and seek cleaner cars without crimping consumer choice. City and state governments can help by removing irrational laws prohibiting dense urban construction, permitting more people to walk rather than drive.

Similarly, it would be better for states to supplement the new law’s support for renewables with carbon prices within their borders. They could even band together into regional carbon price blocs; one such organization already exists in the Northeast and Mid-Atlantic. Spurred by a price signal, consumers and companies would decide how to wring carbon out of the economy, finding the cheapest and most convenient ways to do so.

Though high gas taxes and carbon pricing are key parts of other major countries’ climate strategies, most U.S. climate hawks have renounced the market-friendly approach, assuming it would be unpopular. Similarly, many politicians have concluded that people must be sheltered from market signals that reflect the reality of a changing planet. For example: After major climate-related natural disasters, they will be tempted to subsidize rebuilding in areas that rising seas, more frequent wildfires or more intense drought conditions have rendered more dangerous than before. The instinct to insulate Americans from any kind of climate-related pain will be expensive and counterproductive.

Yet the greatest challenge is not perfecting climate policy within the U.S., but coaxing other nations to follow suit. Consider: If the new law cuts 1 billion metric tons of carbon dioxide annually, that would represent only about 2.7 percent of the world’s 2021 carbon footprint. The law brings the United States to the international climate negotiating table with credibility it never had before. U.S. policymakers must leverage that into obtaining serious commitments from other major emitters.

Some critics of acting on climate change argue that this is impossible. In fact, European countries have done far more than the United States to cut their emissions — and even China had aggressive climate policies in place well before Congress brought America up to speed. From here, the United States must insist on strong, independent international verification programs to confirm that other countries are following through on the emissions commitments that they make. The U.N. climate negotiation process is cumbersome; U.S. diplomats should engage a smaller number of major countries directly, cutting side deals with the relatively small number of nations responsible for the bulk of global emissions. And it will be crucial for future presidents to keep up the pressure on foreign countries; if the United States is going to spend vast resources greening its economy, blowing up international climate negotiations would just negate that sacrifice.

For those concerned about climate change, Mr. Manchin’s unexpected flip was an encouraging moment. But cheering is premature; this is only the beginning of an effort that will be as difficult as it is urgent.