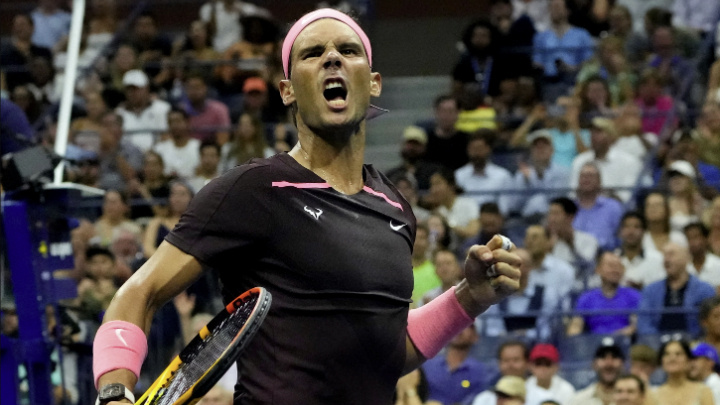 Rafael Nadal has a perfect 18-0 record over Richard Gasquet

Rafael Nadal continued his quest for a third Grand Slam title of 2022 with a victory over Richard Gasquet to reach the fourth round of the US Open.

The 36-year-old won the Australian and French Opens earlier this year before injury saw him withdraw before his Wimbledon semi-final.

He will face American Frances Tiafoe for a place in the quarter-finals.

Ninth seed Andrey Rublev came through a final-set tie-break against Denis Shapovalov to set up a fourth-round meeting with Britain's Cameron Norrie.

Nadal is making his first appearance at the US Open since winning the title in 2019 but had to come back from a set down in both his first and second-round matches.

It was an entirely different story on Saturday as he wrapped up the first set in 42 minutes, saving five break points along the way.

After the opening set bagel, a scoreline that suggests dominance but that did not actually reflect the true tale, Gasquet finally got his first game on the board with the clock reading one hour and 10 minutes; raising his hands in almost celebration as Ashe jumped to its feet.

He was soon brought back down to earth, however, with a Nadal love hold from which the 22-time Grand Slam champion easily saw out the set.

In the third, former semi-finalist Gasquet launched somewhat of a resurgence, responding to an early Nadal break with one of his own and then not allowing his opponent a sniff of another break point.

That was until what proved to be Gasquet's final service game of the match, though Nadal needed four break points to get it over the line. He went on to clinch the match with his 34th consecutive set win against the Frenchman.

Nadal will play Tiafoe for a third time in the fourth round after the crowd favorite delighted the home fans again by beating 14th seed Diego Schwartzman 7-6 (9-7) 6-4 6-4.

"Tiafoe is a great player, he is very charismatic, very fast, so I need to keep improving, keep playing better and better to have chances to go through," said Nadal.

"Hopefully a victory like today helps me to grow. I'm happy to be in the fourth round and I hope to give myself a good chance to keep going." 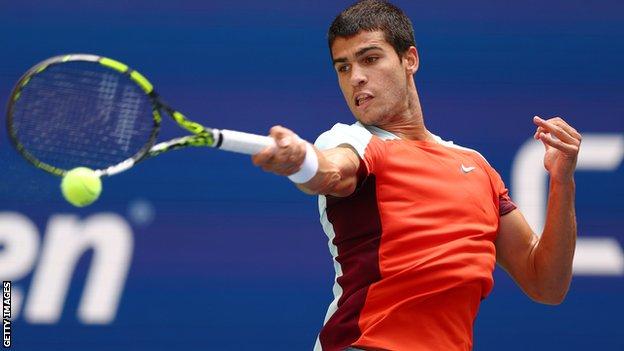 Alcaraz will face Croatia's Marin Cilic - who beat Britain's Dan Evans - in the last 16 after his ruthless disposal of home favorite Brooksby.

"In the tough moments, breakpoints, I played really aggressively - I was there all the time and I made the most of my opportunities," said Alcaraz.

The 19-year-old Spaniard won the key points in the opening two sets, converting three of six break chances and only dropping serve once.

Brooksby, 21, threatened a fightback by breaking serve twice to go 3-0 up in the third set but that simply spurred Alcaraz on to produce his best tennis of the match.

He reeled off six successive games to progress despite almost literally running his shoes into the ground as he was forced into a mid-game change of footwear.

"It is the third time I have broken my shoes - as you can see I ran a lot to get all the balls so it is normal for me," the third seed joked in his on-court interview.

Sinner lost the opening set in his match against American Brandon Nakashima but fought back for a 3-6 6-4 6-1 6-2 victory. 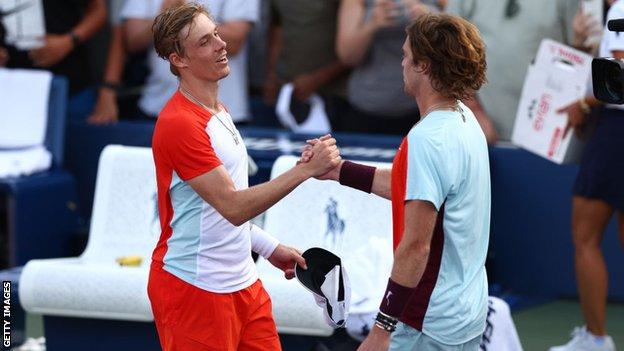 Russia's Rublev, playing under neutral nationality because of the ongoing conflict in Ukraine, and Canada's Shapovalov produced one of the contenders for match of the tournament on the Grandstand court.

There was little hint of the drama to come when the players traded the opening two sets in little over an hour before Shapovalov edged ahead by winning the third-set breaker.

Rublev kept himself in the match by finally converting his fifth set point to level at two sets apiece and looked last-16 bound when he broke 19th seed Shapovalov at 4-4 in the decider.

However, the 23-year-old saved three match points with some blistering groundstrokes before breaking back on the way to a deciding tie-break.

The tie-break was a microcosm of the match as Rublev's accuracy prevailed over Shapovalov's power. The Canadian sent down 23 aces to the Russian's nine across the match and 75 winners to 38 - but also hit 72 unforced errors compared with Rublev's 37.

Rublev took advantage of Shapovalov's mistakes to build up an 8-5 lead and despite the Canadian saving a fourth match point, the fifth proved beyond him as the victor sank to the ground in a mixture of relief and exhaustion before sharing an emotional embrace with his beaten foe as the crowd rewarded both players with a standing ovation.