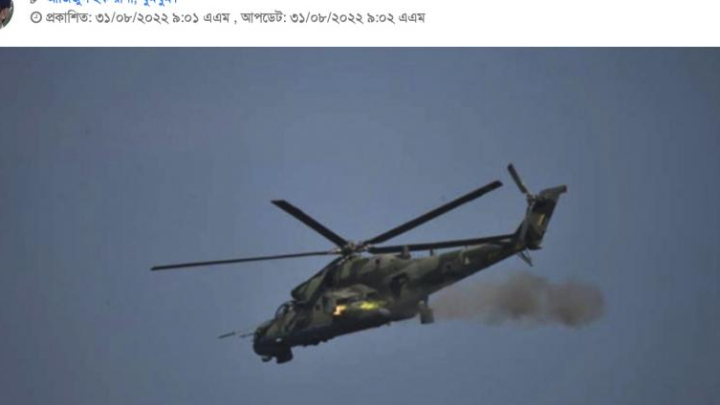 For last few days tension has been growing along the Myanmar border with Bangladesh which has also spread among locals at Naikhongchhari and Ghumdhum border areas, said Md Tariqul Islam, Superintendent of Bandarban police.
"During the incident, fighter jets fired around 8 to 10 mortar shells and helicopters fired 30 to 35 rounds of shells from the sky. Two mortar shells fired from the fighter planes dropped inside the Bangladeshi territory around 120 meters off pillar No 40," told the SP.
"Today locals have reported spotting a Myanmar helicopter firing near the border and two mortar shells dropped near the border," he said.
The law enforcement agencies including Border Guard Bangladesh (BGB) remains alert and intelligence surveillance has also been increased near the Bangladesh-Myanmar      border, said SP Tariqul Islam.
Officer-in-Charge (OC) of Naikhyongchari Police Station Tanto Saha  said, "Myanmar helicopters fired around 300 to 350 rounds in the morning, creating panic among the locals. The helicopters were again spotted around 12:00pm between the pillars No 38 and 39 while the choppers fired 30 to 35 rounds at that time."
"Sporadic mortar shells were fired from Muringajhiri Camp and Tumbru Right Camp," he added. Earlier on August 28, two mortar shells landed in the same area.
On Thursday, State Minister for Foreign Affairs Md Shahriar Alam said Bangladesh is better prepared so that none can enter from Myanmar now due to the deteriorated situation in Rakhine State.
The Myanmar side was warned twice in August following mortar shells landing in Bangladesh territory from Myanmar and strong protest was lodged in this regard.
"We do not want to step into Myanmar's provocation or trap," he said, adding that they (Myanmar side) might have a strategic benefit if they can move in such a unilateral direction.
The Ministry of Foreign Affairs last Monday summoned Myanmar Ambassador to Bangladesh Aung Kyaw Moe and lodged a strong protest against Myanmar's mortar shells landing inside Bangladesh territory a day earlier.